I Found The World So New 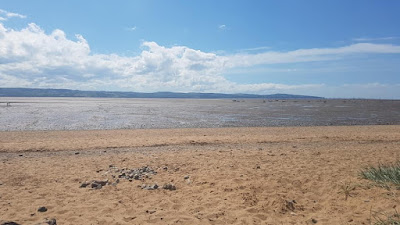 This is the beach at Thurstaston on the Wirral, a quiet and sandy stretch with cliffs in danger of collapse behind it and the Dee estuary and North Wales in front. We went last weekend, the first time I've been to a beach or the sea for ages. The tide was out so we didn't see much sea but just being on a beach after so long was lovely.

The debut album by Australian samplers/ band The Avalanches came out twenty years ago- we'll let that pass without too much comment but twenty years, WTF etc. Since I Left You famously is made up of 3, 500 samples, a swirling, technicolour, happy go lucky, kaleidoscope of a record, dizzy and in love with summer, sun, the sea, parties and living your best life.

Since I Left You

The single Frontier Psychiatrist was/ is a fine example of the art of turntablism, the band's turntablist Dexter Fabay cutting and scratching. This remix by Mario C, a long time Beastie Boy associate, takes it all further.

Since I Left You is out now as a twentieth anniversary double CD/ quadruple vinyl edition with fifteen remixes including ones from Prince Paul, the recently deceased MF Doom, Stereolab, Cornelius and this techno/ disco thumper remix of A Different Feeling by Carl Craig.

I remember my friend Dave getting all fired up about Avalanches and he lent me his newly purchased CD of Since I Left You. I couldn't quite believe what I was hearing, there was so much going on, yet it felt so exciting. I've had the Cornelius, Stereolab and Prince Paul remixes for a while, but missed Mario Caldato Jr's remix of Frontier Psychiatrist. Great, isn't it? Likewise, the Carl Craig remix of A Different Feeling. Interested to hear what MF Doom picked.

I really like the Edan remix of "Tonight Might Have To Last Me All My Life" The Stereolab remix inspired me to dig out Cobra and Phases..which in turn led to listening to an album I'd forgotten about The Free Design:The Now Sound Redesigned, which is an excellent listen.