Paisley Dark Is In Your Heart 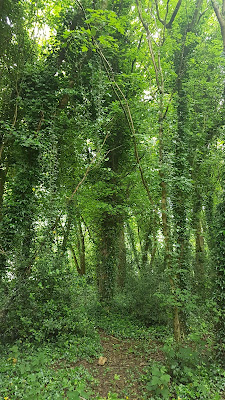 Paisley Dark is a label based in Leeds specialising in dark, psychedelic electronic music, edits and remixes and original works. Recently I posted the Jesse Fahnestock re- edit of Spacemen 3's How Does It Feel, a deep, dubbed out version of Rugby's finest's druggy gospel sounds. This one, again by Jesse in his 10:40 guise, appeared at the end of May, a skewwhiff take on a hypnotic, slowly building song that sounds like it's come from somewhere else, a radio tuned into another reality- Inner Meet Me from The Beta Band's  second EP, The Patty Patty Sound (from 1998). Those first three Beta Band EPs really were something else. Jesse's 10:40's Outer Hebrides Dub is five minutes of pulsing, trippy sound and can be found at Bandcamp (free downloads available while they last).

Also out on Paisley Dark is an edit of Julian Cope's Safesurfer, his 1991 ode to contraception. The Jezebell edit is slightly shorter than the Archdrude's original and burns more slowly- descending bassline, hissing hi- hats, swirling, looped, chopped up vocals smothered in echo before Copey's refrain, 'You don't have to be afraid, love/'Cos I'm a safesurfer darling'. I've no idea who Jezebell is but this edit is clearly an act of love. Available at Bandcamp, free download while stocks last.

Thanks very much Adam! Glad you enjoyed them. While I know Paisley Dark have the best intentions in giving me credit by name, I record as 10:40 and people can find my original stuff -- more than they want, probably -- here:

A great brace of remixes, Adam. Julian Cope remixes are relatively few and far between, but always worth the wait and this is no exception.

Jesse, I bought All Of Us on the back of Adam's previous post of your Spacemen 3 remix. It's been a frequent soundtrack to my daily commute, I've really enjoyed it.

That's amazing to hear Khayem, thanks! Adam, your royalty check is in the post.

For what it's worth, Khayemem, I have a new release coming tomorrow. It's a split single with me remixing a friend on the A and him remixing me on the flip. I'm very pleased with it and hope you like it!

Thanks, Jesse, purchased and listened to this morning. Yes, I enjoyed it very much. I like what Eagle Harbor have done with Bone Cutter, and your wonderfully titled Jellyfish Jam Dub of "Badwater Lake" is great. I've posted praise on my blog this morning.