This City's Made Of Lights 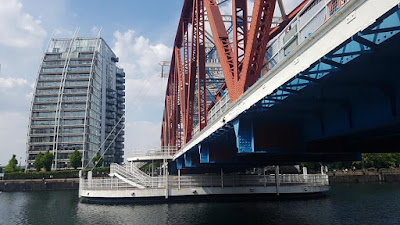 Way back in 1989 Galaxie 500's album On Fire caused a bit of a sensation- the shimmering guitars, mid tempo metronomic drums and Dean Wareham's falsetto vocals spread over two sides of vinyl housed inside an orange sleeve all came together to make a very immersive, self contained record. When the Blue Thunder EP came out in 1990 they included their cover of New Order's Ceremony, pretty much the best cover of a New Order song in existence.

Dean went on to form Luna with Britta Phillips, and also record and release as Dean and Britta. Last year they covered Neon Lights, a homage to Florian Schneider who died in April last year. The cover is a sparkling, shimmering piece of music, a dreamy indie cover of Dusseldorf's finest men- machines.

Wonderful ! I'd like for them to cover 'More than this', the Bill Murray version, not the Brian Ferry original. If only we could arrange these things.
-SRC

We could put together a list and send it to them via one of the social media platforms. You never know.

Yes Adam you are the optimist. I think that Dean and Britta could do a fantastic version, give the song back it's life. Bill Murray seemed to capture it's true meaning in his broken 1.02 karaoke version. The Roxy original too slick, too 80's, too plastic. Over to you Adam, make the magic happen.
-SRC