I'm Aching And Empty And I Don't Know Why 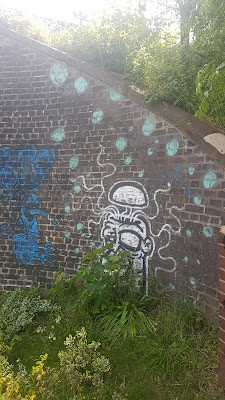 In the eleven and a half years I've been writing about music here I've never once written about or even mentioned Simon and Garfunkel or Paul Simon- which is a little bit strange as they are one of my earliest musical memories. All of the following started to run through my head a week or two ago when a Simon and Garfunkel concert was showing on one of the cable channels, a re- union concert with thousands of cheering New Yorkers and a stage full of musicians.

Back in the late 70s my Mum bought us a compilation album of hits of the 60s, cover versions by session musicians paid by the hour, knocking 'em out in London recording studios. The Top Of The Pops series are well known- this wasn't one of those but an even more budget album. It had Harlem Shuffle, Windmills Of My Mind and Get Back on it and Simon and Garfunkel's The Boxer. There must have been six or seven other songs but those four are the ones I remember. The Boxer made a big impression on me, Paul Simon's lyrics showing a young me, nine or ten years old, something about the power of words and phrasing and what happens when an artist marries them to a good tune. A decade later, in the summer of 1988 I remember watching The Graduate and then rifling through my mum's singles collection for her 7" of The Sound Of Silence. A few years later on I bought Simon And Garfunkel's Greatest Hits, one of those albums that sold in the millions and could be picked up in second hand or charity shops for pennies. This song is seared into me...

Based around a road trip Simon took in 1964 with his girlfriend Kathy, America is as good as any song of its kind. The opening line, 'let us be lovers/ we'll marry our fortunes together', jumps out of the speakers followed by Simon's beautifully painted details of the couple's bus trip. The search for 'America', literal America and metaphorical America, ties the song straight into all those giants of American culture, Kerouac's road, the pioneers of the 18th and 19th centuries and Walt Whitman. The search in the vast continent of North America that is really a search for self and for meaning. The last verse is a killer, capable of moving the hardest of hearts- '' 'Kathy I'm lost' I said, though I knew she was sleeping/ 'I'm aching and empty and I don't know why/ Counting the cars on the New Jersey Turnpike/ They've all come to look for America'. I've never been to New York and I'm sure the New Jersey Turnpike is just a motorway junction but it holds a special place in my personal mythology.

By 1987 Paul Simon had recorded the album Gracelands. The single You Can Call Me Al,  with Chevy Chase starring in the video, was inescapable. Paul Simon had broken the cultural boycott of South Africa's government and the apartheid system. As a card carrying socialist and supporter of the African National Congress  in 1987/8 the words of Billy Bragg, Paul Weller and Jerry Dammers carried more weight with me than Paul Simon's songs so Gracelands was verboten (although Joe Strummer was a massive fan of the album). Plus it seemed to be very much a yuppie/ compact disc album back then, not the sort of thing to be caught listening to. I still don't own a copy but it would take a churl to deny the power of the songs, not least this one which is the very essence of life affirming pop coupled with African music. Simon travelled to South Africa and met and played with a number of musicians. This song was written with Ladysmith Black Mambazo, singing in Zulu, and with Youssou N'Dour on percussion.

Diamonds On The Soles Of Her Shoes

This dub/ remix by Scandi- house producer Todd Terje is a joy too, a smart example of the art of the re- edit and how to push a song back onto the dancefloor several decades after it was recorded.

America, quite the song.

I've always loved The Sound Of Silence. Such beautiful melancholia. And that's a great remix of Diamonds...

Big fan of Simon & Garfunkel and much of Simon's solo work as well, particularly his first album and Graceland, but so many great songs through the years. In the summer of 2001, Mrs. LTL had to be in Princeton, for the summer, and I was back in Chicago working and living an unexpected life as a bachelor (kids still a few years off). All I did was go to shows and baseball games most evenings. It was glorious. One of my favorites was a double bill of Brian Wilson and Paul Simon. I sprang for second row seats on the secondary market and had a ball.

Should add I know the name Todd Terje from his work on Bryan Ferry's cover of Johnny & Mary. This take of Diamonds on the Souls of Her Shoes is excellent.

Excellent post. Here in the States, "Graceland" was definitely a "compact disc album," but one that everyone played until the laser burned out. That statement may make it seem that none of us cared about the cultural boycott; not true — even fervent backers of Artists United Against Apartheid found room to support what Simon was trying to do for South African musicians. (Reading this article, however, did give me a perspective I didn't fully have at the time: https://www.theguardian.com/music/2012/apr/19/paul-simon-graceland-acclaim-outrage.) Thanks as always for your insights and for bringing back memories of "Simon and Garfunkel's Greatest Hits," which could be found here in every home that could afford a copy in the mid-70s.

"The Boxer" was one of those songs that I heard a lot on the radio as a kid, recognised as S&G but never knew the title of it until many years later. Coincidentally, Bob Dylan's version from Self Portrait shuffled up the other day, around the time of your post. I've never really listened to Paul Simon much, apart from two key moments. The first was a mixtape that my brother's then-girlfriend made for him, featuring lots of Neil Young (acoustic), Nick Drake, Joni Mitchell and S&G (which was when I put a title to The Boxer). The other was when I was staying with a friend's family in Perth at the start of a year in Australia. The dad had a Paul Simon 'best of' and played it constantly. Of the few Paul Simon songs I have now, the Todd Terje remix is one of them and it's a favourite. Looking forward to listening to America.


Love S&G, they did some great stuff.