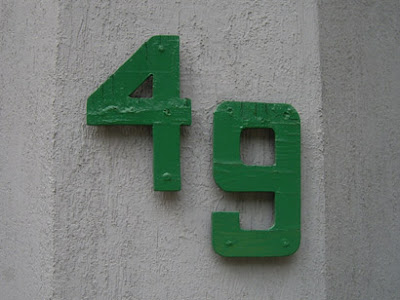 It's my birthday today- the number above.

Madness were a lot of fun on Friday night. I won precisely nothing betting on the horses. Suggs and saxophonist Lee Thompson are a great pair of frontmen (Chas Smash left a few years ago). The set was as you'd expect heavy on the hits, a run of songs pretty much unparalleled in British popular music plus a couple from their more recent albums, a mass singalong for It Must be Love and an encore of Madness (the song) and Night Boat To Cairo which saw outbreaks of pandemonium in the crowd. I was going to post this on Friday but didn't so here it is as a bonus, a deliciously skanking, dubby Andrew Weatherall remix of Madness from 2012. I'm sure that there was a second version of this, a dubbier one, that's never been released that Weatherall played on one of his radio shows.

Looking for songs with 49 in the title I fond this one from The Jazz Butcher, released on Creation in 1988, a spiky, ramshackle, catchy indie guitar song from Pat Fish that rattles along breathlessly, surfacing for the 'you make me want to carry on' line. This sort of thing seemed ten a penny in 1988 but like genuine moments of mini- greatness now. I first heard it on the Creation compilation Doing It For The Kids, a brilliant example of the art of the compilation album (The Jasmine Minks, The House Of Love, My Bloody Valentine, Felt, Primal Scream, Pacific, The Times, Nikki Sudden and The Weather Prophets plus several others showing Creation had an embarrassment of riches at the time). The Jazz Butcher's Lot 49 references a novel by Thomas Pynchon which I feel like I should have read but haven't.

Hope you have a happy birthday in a house of fun SA.

Have a great day Swiss,Happy Birthday to you.

All the best SA

Happy Weatherall.
Who ? Ah you know him.

Welcome to 49, mate. Come on in... the water is fine. I'll be leaving you in about six months. I bet Madness put on a hell of a show. Have even enjoyed some of the more recent material.