For Just One Moment In Time 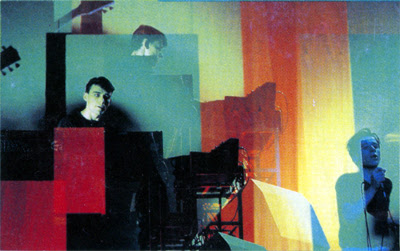 This is a song I keep going back to at the moment, listening and then skipping back to the start, the opener to Simple Minds' 1981 album Sons And Fascination. Never was there I band for whom the phrase 'I prefer their early stuff' is so appropriate. Their early stuff is among the best music of the era (and their later stuff really isn't). Empires And Dance and New Gold Dream are both superb too but this one is the one for me.

In Trance As Mission starts with a Derek Forbes bassline, one of many on the album that personify post-punk bass playing, along with a rigid drumbeat. The synths are central not merely providing colour or filling the sound out. Guitarist Charlie Burchill plays one note throughout, ringing with feedback. A long way to start an album, nearly seven minutes, Jim Kerr singing about moments, the holy back beat, trance as mission, trans American, white rocks, dreams, a new type of light, all the post-punk poetics. Religion maybe. The combined effect is thrilling, dramatic, forward thinking. Top stuff from a band who later on went for the money over the art but certainly paid their dues as far as art is concerned

In Trance As Mission

Sons And Fascination is a great album and a curious one too, packaged with a second disc of songs called Sister Feelings Call (which includes Theme For Great Cities, a song which most bands would kill to have written and which Kerr showed admirable restraint in deciding it didn't need vocals). Not a traditional double album, an album with an extra disc of songs. Ideas galore, loads of ambition and songs to spare.
Posted by Swiss Adam at 08:00

I have a copy of Sister Feelings Call but not Sons and Fascination.
It's a toss up between them, Rod and UB40 as to the act which most went from good to bad.

This is the band's best period. Love Song, Sweat in Bullet and the American are probably my top three out of the entire discography. I wonder... how many times have I listened to them in my life?

The build up by Simple Minds from Life In A Day to Sons And Fascination/Sister Feelings Call is legendary in the annuls of Post Punk. It is on of the releases that marks Post Punk's apogee.

In Trance Mission opens the album with Motorik brilliance from Forbes and McGee. Mick MacNeil's synths provide both atmosphere and drama as called for. Burchill's sharp edged guitar shoots spikes out from the background throughout the track. Finally, Kerr's vocal approach, almost vocal riffing over the complexity of the music, gives the track emotional muscle.