Sell My Soul Back To Me 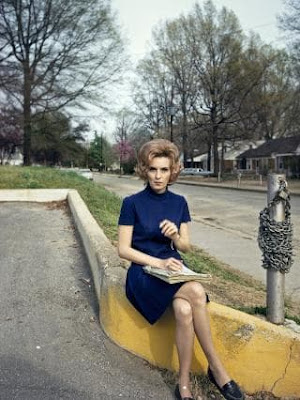 This came out in 2003, a sumptuous electronic song from the turn of the millennium adorned with the vocals of Dot Allison, one of those songs that can leave feeling happy or sad depending on your mood when hearing it (and also that confused happy-sad state).  King Of Woolworths was Jon Brooks who has more recently been releasing records as The Advisory Circle. The album Sell Me Back My Soul came from, L'illustration Musicale, also had contributions from Bob Stanley of St Etienne and Emma Pollock of The Delgados but I don't own a copy of it. Given the quality of  Sell My Soul Back To Me and effect it has on me I have no idea why I have never bought a copy especially as I've got almost everything else Dot has sung on. The video below is fan made from a film called The Cell, which I haven't seen. The photograph is by William Eggleston and is perfect in ways I cannot describe.

Thanks for putting me onto William Eggleston's photography. There is so much in the world and so much to miss. His photos are entrancing, almost films, novels or songs in themselves. A kind of noir technicolour (a contradiction i know).
cheers-SRC

After further studies i think it should be 'Noir Kodachrome', but i will stand corrected by those who know their emulsions!
-SRC

The King Of Woolworths is an excellent album and The Cell is visually stunning,but not the best.

My pleasure SRC. I like 'Noir Kodachrome' as a description.