Sonic Boom In The Pink Room 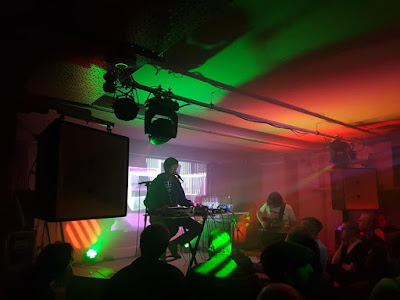 Sonic Boom played The Pink Room at YES, Manchester's newest gig venue, on Wednesday night in a small upstairs space called the Pink Room (it's painted pink and has a bit of a Warhol/Factory vibe going on). The room holds about 250 people and the gig wasn't sold out. The post- Spacemen 3 trajectories of Pete Kember and Jason Pierce are a bit mystifying, Spiritualized playing grand venues to thousands while Sonic Boom/Spectrum plays to the low hundreds. It gives a better gig experience though if you prefer intimate and up close but you can't help but feel Pete has been shortchanged somewhere along the line.

Sonic takes the stage with one other musician, a guitarist with long, centre parted hair who is wearing a Spacemen 3 t-shirt. Without much in the way of introductions he begins playing the riff to Transparent Radiation, Spacemen 3's cover of The Red Krayola's 60s psyche- rock classic. After this slow, repetitious opener Pete doesn't play guitar again until the end, instead sitting at a table with keyboards, synths, a sampler and an array of pedals, cables, leads and plug ins. From hereon in Sonic digs deep into his bag and plays a selection of songs from his back catalogue- long, slow, hypnotic tracks, loops and drones from the various boxes on the table, all sorts of delay and echo going on. One song often melts into another, the pedals continuing to give out their sounds, loads of tremelo and wobble, as one ends and the next begins. We get All Night Long and Lord I Don't Even Know My Name from two different Spectrum albums, Spacemen 3's Call The Doctor and Let Me Down Gently, all perfectly illustrating Sonic's talents, lyrics that are either melancholic or devotional over the top of undulating synths and waves of sound, drones and loops and repetition. There's no drummer so the songs never get that injection of oomph and power a drummer brings, instead they glide by complemented by the trippy visuals projected onto the back wall. In the middle of the set Sonic starts manipulating a vocal sample. The set list website says this was during I Know They Say (from Spectrum's Highs Lows And Heavenly Blows) but I don't recall that song being the basis of what becomes very improvisational, Sonic constantly triggering the vocal sample, stuttering it, repeating phrases, building in intensity on and on, for what must have been ten or fifteen minutes. He goes back to the guitar for the penultimate song, a fairly blistering take on Suicide's Che. Pete then tells us something along the lines of 'this is where we fuck off back stage for a few minutes, you clap and then we come back out but that's bollocks so we're just going to keep playing'. He fiddles with a few boxes, sets them going for a finale of Big City (Everybody I Know Can Be Found Here), the highlight of Spacemen 3's Recurring album and the band's last single, Sonic's psychedelic, acid house influenced peak- the pedals and synth pumping the song out, the guitarist using an e-bow to play the top line  and Sonic leaning in to deliver and repeat the lines, 'everybody I know can be found here/ let the good times roll/ waves of joy/ yeah I love you too', for fifteen blissed out, mesmerising minutes. Waves of joy indeed. I wish he'd tour more often.

This is the ten minute version of Big City from back in 1991, still sounding magnificent nearly thirty years later.

Big City (Everybody I Know Can Be Found Here)

And this is a 1992 single by Spectrum, also off their album Soul Kiss (Glide Divine) out the same year.

How You Satisfy Me

It's a great review and it seems like you were part of an unforgettable gig.

Listening to a lot of Spectrum and Spacemen 3 stuff over the last couple of weeks. It has had a pleasantly calming effect on me.