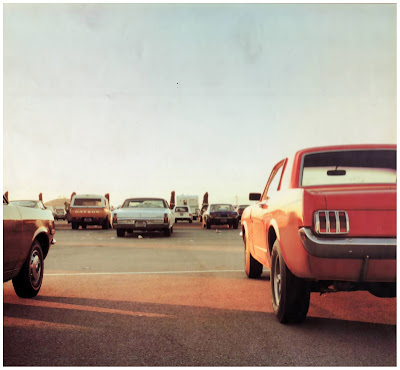 I've been enjoying the photography of William Eggleston, the American artist who pioneered the use of colour in the late 60s at a time when black and white was very much the thing for serious photography (and a man whose work adorns the sleeves of albums by Primal Scream and Big Star). Eggleston's colours are vivid, saturated and inky but with a home movie feel. He captures the USA in the second half of the 20th century away from the bright lights at the edge of town- cars, parking lots, shops, petrol stations, weeds growing through the cracks in the pavement, often at an angle that makes the picture look grabbed in an instant or stolen when someone's head was turned away. The fade of the colours, the shadows, low angle of the shot and the perspective in the one above are perfect.

Gabe Gurnsey of Factory Floor had a solo album last year called Physical that sounded great, an escape from the more industrial rhythms and sounds of his band into something warmer and more direct- 808s, cowbell, swampy basslines, sirens, drawled vocals lines, a sort of unfussy, modern, slinky and filthy dance record. One of the tracks, New Kind, has been extended and remixed for a 12" release. The Extended Dub is a bass-led groove, ideal for getting down to tonight at the end of the working week, a bank holiday in front of you, and the promise of some fun.

Great photo, great music.
The pic also reminds me of those 1970s magazine ads - for cars and cigarettes I'm thinking, the predominance of browns and reds and something in the light and space. Very atmospheric.

Yep, his photos definitely have an advert sensibility to them.