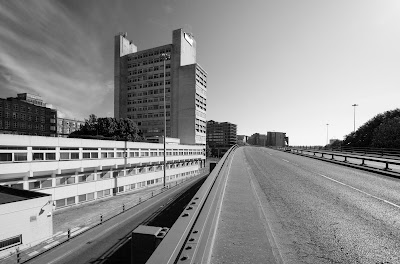 Mancunian artist LoneLady has released a cover of New Order's 1981 B-side Cries And Whispers. Her sound and aesthetic are partially rooted in those early 80s New Order records and Manchester's spirit of those times- her last album was inspired by walking round the concrete and streetlight spaces underneath the Mancunian Way (a section of elevated motorway that skims the southern edge of the city centre). I don't always like covers of New Order songs but this is a keeper.

The original was one of two B-sides on 1981's Everything's Gone Green single, a song that skipped the group forward several paces, the moment when they combined rock and dance for the first time on disc and the last time they worked with Martin Hannett. The two songs on the flipside- Cries And Whispers and Mesh- were mislabelled on the disc and then again on Substance, causing confusion for years. One listen to this song, the synth sounds at the intro, the skittering rhythm, Barney's bleak vocal, Stephen's metronomic drumming and the swell of keyboards towards the end, should convince anyone that New Order were a class apart from around this point onwards and for most of the 80s.

Cries And Whispers
Posted by Swiss Adam at 08:00

LoneLady certainly captures that Early 80s synth/production vibe. There's an approachability in her version that is not so immediate in the original. It's this that sets the two versions apart and makes room for both to exist for me.