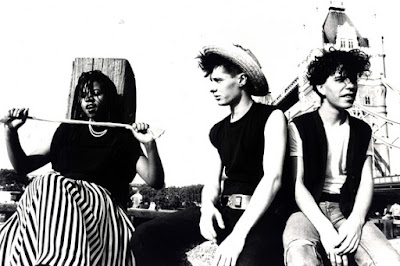 At only six minutes forty-three seconds this isn't an especially long song but it came up on shuffle over the weekend and sounded immense. Released back in 1983 this is Colourbox's magnificent take on Baby I Love You So, an Augustus Pablo song from 1974 recorded by Jacob Miller, but updated by Martyn and Stephen Young making the most of early 80s technology- it doesn't sound dated all these years later either, that bassline alone is worth the price of admission. The guitar part is ace, not your standard reggae guitar part, the cymbals splash away and Lorita Grahame's vocal glides over the top.

Good to hear this one. I think Colourbox are one of the great lost bands. Their use of technology took them ahead of the curve at the time. Check out the 'Colourbox' mini Lp from '83 (great sleeve art!). 'Nation's' bass synth squelches pre dates acid house by a good few years and 'Shotgun's' low slung electro funk is great also. Of course MARRS was yet to come, but then they seemed to just drop off the map? Martyn Young sadly passed away a few years ago, but left behind some truly original music.
-SRC