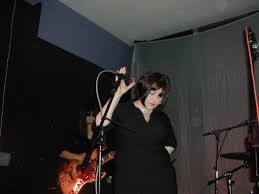 In 2005 Sister Vanilla released their only album to date, Little Pop Rock. Sister Vanilla was/is Linda Reid, the sister of Jim and William. Back in 2005 Jim and William were only just talking again and the Mary Chain hadn't yet re-united. Instead Little Pop Rock became a sort of Jesus And Mary Chain album by proxy, Linda on vocals throughout and Jim and William recording songs with her in her flat and at their studio The Drugstore (along with Ben Lurie who followed Jim after the JAMC split up live onstage in Los Angeles who plays on it ). The album was recorded piecemeal over a couple of years with Stephen Pastel helping out, while Jim and William presumably found their way round working alongside each other again.

Some of the songs on Little Pop Rock appeared elsewhere in the brothers catalogue- K To Be Lost on William's Lazycame album and Can't Stop The Rock and The Two Of Us on the reformed Mary Chain's Damage And Joy from 2017 (Linda singing on the former). The songs reference the Mary Chain in places- the song called Jamcolas for one, a scuzzy romp with Jim singing the first half of the song and Linda the second. On K To Be Lost Linda sings 'Honey's Dead and Psychocandy, I listened to them all of the time'. Linda had sung on The Mary Chain's swansong, 1998's Munki, the song Mo Tucker being one of that albums few high points. So it's a Mary Chain album in many ways with shared vocals, lo-fi and homemade (and all the better for it), Linda's voice providing a good counterpoint to her brothers.

This one opens with a drum machine and single piano notes and a sense of impending doom. The guitar playing is spindly and distorted and then Linda, vocals smothered in reverb, sings of Tienanmen Square, digital pies and Jim Morrison.

What Goes Around is full on self-loathing set to a three chord rumble with lyrics about hookers and LSD, money, drugs, fame, piss, mothers and wives, good times becoming bad times. Eventually William joins in singing 'what goes around comes around'.

What Goes Around
Posted by Swiss Adam at 08:00

Haven't played this album for a very long while. Time to revisit it I think.

This is an excellent album. Oddly enough it was released with a very different track order much earlier in Japan.