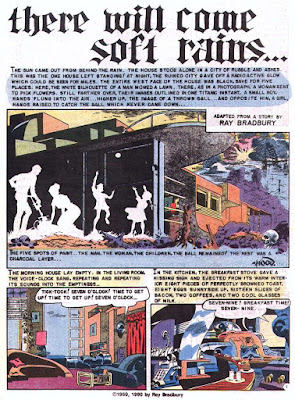 I discovered an album by Zarelli via a Twitter friend a couple of months ago after he posted a Youtube clip of one of the songs. After a few days of streaming the songs I bought a copy and have been playing it on and off for a few weeks now. It is a perfect Sunday morning record. In 1975 Leonard Nimoy, world famous as Mr Spock in Star Trek, read some Ray Bradbury science fiction stories which were released as an album with Nimoy's reading of There Will Come Soft Rains from The Martian Chronicles on one side and some chapters from The Illustrated Man on the other. Nimoy has a fantastic speaking voice, distinctive and instantly recognisable.

Not long after Leonard Nimoy's death in 2015 musician and producer Carwyn Ellis set Nimoy's words to music, electronic space age futurism and cosmic easy listening and released the album as Soft Rains. For the Soft Rains album Carwyn Ellis called himself Zarelli and on the sleeve he listed the instruments used on the record- Farfisa organ, Roland and Juno synthesizers, Rhodes electric piano, Suzuki Omnichord, iPad.

Ray Bradbury's There Will Come Soft Rains is set in an immediately post-apocalyptic world, in the aftermath of nuclear war. A completely automated house continues to perform its duties for its inhabitants. The house's family have been vapourised by the nuclear explosion, their silhouettes are burnt onto an outside wall of the house. The family dog turns up at one point, the only living being the house can now provide for. It dies soon afterwards and the house disposes of the body before a firestorm breaks out, destroying the remains of the house leaving only the wall with the silhouettes on standing and what's left of the automated house still reading out the time and date- 5th August 2026. Once you've listened to the track below a couple of times, Zarelli's beautiful music and Nimoy's voice reading Bradbury's words, you'll probably head over to Youtube and listen to some of the rest of the album, and if you're anything like me then go and hunt down a copy of the album.

There was a narration of There Will Come Soft Rains on Radio 4 extra either earlier this year or at the end of last year. I remember it made me quite uneasy

btw, I have done as you suggested.

Well worth it Drew.