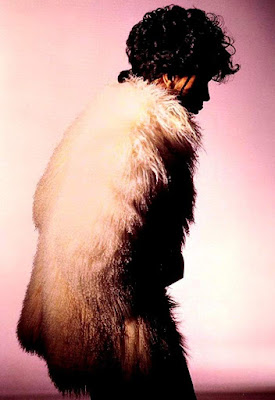 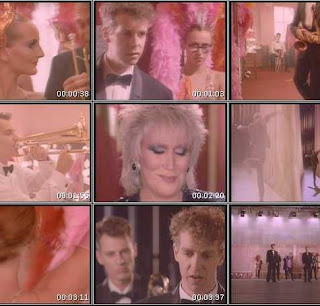 I've become a little obsessed with the repeats of Top Of The Pops running on BBC 4, especially the episodes recently stuck in the summer of 1987. Specifically I've become obsessed with the new depths to which the show sinks every week, presenters and audience desperately trying to pretend this is the greatest time to be alive despite almost every studio performance and video proving otherwise. A couple of weeks ago I wrote about New Order's appearance in the studio playing True Faith as being the only bright spot in a dismal run of bands, artists and songs. But then in mid- August something else happened, two good songs, two weeks running, both shown by video. As I watched the two videos they also seemed to suggest something fundamental about the two artists and maybe also about differences between the smart end of British and American pop culture in summer 1987.

Pet Shop Boys hit their stride the year before with West End Girls and Suburbia and then marched into their imperial phase with It's A Sin. In August What Have I Done To Deserve This? reached number two. The single features Dusty Springfield on vocals, then a long vanished presence in the music world, and is archetypal Pet Shop Boys. Neil has two vocal parts, a sung part starting with 'You always wanted a lover/ I only wanted a job...' before Dusty joins in on the second verse. Neil's spoken word section before the chorus- 'I bought you drinks, I bought you flowers, I read your books, we talked for hours...'- perfectly enunciated and high in the mix is peak Tennant, as important to the song as Dusty's great contribution. Chris Lowe's music is peerless electro-pop, from the synth drum opening beats to his Roland synth and keyboard parts. This song stood out amidst the dross of summer 1987 but it would have shone in almost any company.

What Have I Done To Deserve This?

The video is very British, filmed in a theatre with a chorus line and a pit orchestra, a nod to a pre-pop music world, curtains, drapes and feathers.

In the chart at the same time and on Top Of The Pops in the same two weeks was U Got The Look by Prince (a single from the Sign Of the Times album). U Got The Look is hyper 12 bar rock, strutting about with a massive Linn drum and, like the Pet Shop Boys, a shared vocal- Prince and Sheena Easton. It is super funky, highly stylised, a song about sex and sexiness- in the video, also shot in a theatre, everyone is shot drenched in colours (from neon lights, from overhead lights, in shadows). Almost everyone is barely half dressed in tight, minimal bodycon clothing. Sheila E manages to steal the show from Prince in her outfit, not an easy task. In response Prince throws in a guitar solo so over the top and so processed it's almost a parody. It is wonderful stuff, seductive and funky and fun and so un- Britain in 1987, especially when compared to the knowing, raised eyebrow of the Pet Shop Boys and the world depicted in their video.

U Got The Look

U Got The Look reached number two in the US but only number eleven in the UK. Both records glisten like diamonds among the supporting cast in the chart- Whitesnake, Sinitta, Kenny G, The Firm, Wet Wet Wet, Rick Astley, Samantha Fox, Def Leppard. Motley Crue, Marillion, Shakey, Bruce Willis, Spagna, Heart, Los Lobos...

Two top pop songs. Los Lobos were a great band, but the rest of that run down is unrelentingly dire.

I think I learned to loathe La Bamba

Christ on a bike, Spagna ... which autocorrect so wants to change to Stagnant...

La Bamba was their novelty hit. They were a lot better than that.

I've been watching them too, generally dire but with the occasional gem as has been said.
The Big Hair Days!

I've been watching the TOTPs repeats and they are a very interesting cultural history,plus a history of what I've remembered and not remembered as I watched it religiously growing up.

Yep, some stuff on them I have no memory of at all.