You Were Putting Me On 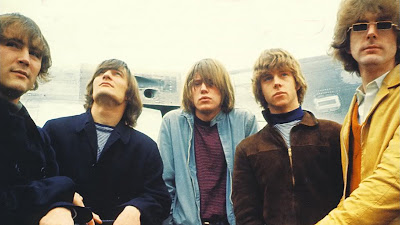 I found this clip recently and it made me smile, Teenage Fanclub back in 1995 or '96 playing live on The White Room, covering The Byrds 1965 B-side (B-side!) I'll Feel A Whole Lot Better, if push comes to shove my favourite Byrds song.

There's nothing wrong with this clip at all- Teenage Fanclub in 1995, a band in love with music and the sheer joy of playing, Norman and Gerry sharing the vocals, a group who could out jangle anyone, totally Byrdsy. There's some frantic tambourine rattling too from roadie Guitar George.

I'l Feel A Whole Lot Better opens with that wonderful chiming Rickenbacker riff by Jim McGuinn and then lifts off, with all the harmonies, the uncertainty of the lyric- 'Ill probably feel a whole lot better when you're gone'-  and that rocket fuel rhythm section, a perfect slice mid 60s folk rock, all over and done with in two minutes and thirty two seconds. I'll Feel A Whole Lot Better was written and sung by Gene Clark and released as the flipside to Mr Tambourine Man, their first self- written song that sold in its millions.

In 1989 Dinosaur Jr covered the song, released on a Byrds tribute album called Time Between, an album that also had covers by the likes of the Mock Turtles, Thin White Rope, Miracle Legion, Robyn Hitchcock and The Chills. J Mascis, Lou and Murph go at it fast, ragged and in one take. Gene Clark said this is his favourite cover of the song and I can't disagree with that. I don't have a copy of this anymore- I owned the album once but have no idea where it is now. If anyone has an mp3 of this version I'd be more than happy to take a copy off your hands.