Take Time For Your Pleasure 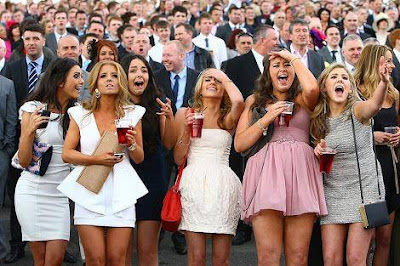 I'm off to Aintree Racecourse tonight, not a sentence I use very often- or ever before. This is a work team night out, an evening of horse racing, gambling (remember kids- stop when the fun stops) and Madness. As in, Madness, the Nutty Boys, the Los Palmas 7, Suggs and co. Back in 1983 as a callow thirteen year old the first gig I ever attended was Madness and The JoBoxers at Manchester Apollo and I haven't seen them since so there will be a nice completing of the circle. I've never been to the races before either and have a history of occasionally getting dress codes wrong at events where the words 'smart' and 'casual' are used in the same sentence.

The Wings Of A Dove was a standalone single in 1983, a time when even the now lesser known Madness songs were huge hits. One of my younger brothers was a Madness obsessive as a kid and still knows all their UK chart positions by heart. I use Google. This one reached number two.

Sounds like fun. A whole house of it even

Enjoy. Only been to Eintree once, April 1992 put my last 20 quid on a horse called Party Politics, won £240 but would rather have been in Glasgow where Airdrie were playing Hearts in the Scottish Cup semi final, nil nil draw got to the see the replay when we beat the Jambos but lost the final to the Huns, que sera

I checked the website and it said jeans were ok with a shirt and jacket. So I wore that with desert boots. And needn't have worried given the variety of dress styles worn by other racegoers.