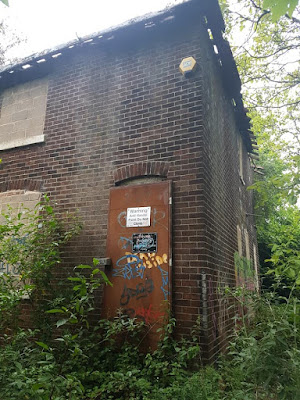 This Flowered Up single wasn't released until after the band split and then only on 7" in a run of 500 copies on Heavenly. The group's 1991 debut album A Life With Brian and the singles that preceded it, It's On and Phobia, were both awash with the spirit of the times, a post- Mondays, E- fuelled rush, keyboards and guitars swirling around in the mix with Liam Maher's drawled, sprawled vocals on top. The album felt a bit flat in comparison but they hit the bullseye with their 1992 single, the thirteen minute epic Weekender. Various difficulties followed, not least some debauched touring according to those involved which accelerated the habits of some of the members. They played Glastonbury and Madness' Madstock but some studio sessions produced little and inter- band tensions rose. They split up the following year.

In 1994 Heavenly put Better Life out, the only real fruits of the post- Weekender recording sessions. It's a step on again from Weekender, Flowered Up moving towards an expanded sound with horns and dub influences. It's confident and assured and doesn't sound like a band about to call it a day, an indie- dance/ reggae groove, produced by Clive Langer (who'd produced Madness, Dexys, The Teardrop Explodes and Elvis Costello), guitars crashing in and out and Liam looking for an elusive better way.

I really liked all of the singles they released including this but as you say the album was a bit flat.

The Weekender single apart, I always thought they promised a bit more than they delivered. The album is indeed a bit flat, and to my ears a bit of a disappointment. However, this track is really good and it's a shame it couldn't be followed up.

Great photo - there is something decidedly sinister about that house, though!

The house is down by the ship canal in Eccles- strange area, derelict and overgrown, clearly lots of housing there once but this is more or less the only one still standing.

When I saw them at SW1 club in Victoria, London, they played Better Life, then un-named and the only new song in the night, it's reggae bassline intrigued me, I initially missed the release of Better Life 7", and took me years to find out this unknown song. I now have it, and love it.
Regarding the album, I found it a bit flat at the time, but now I listen to it a lot, probably more than any other album in that era. I love it.

"Weatherall's Weekender" is the only Flowered Up record I own, and the original is loitering on the "Annie On One" CD compilation somewhere, but I was never moved to get anything else by the band. I quite liked the singles, was amused (against my better judgement) by their cover of Right Said Fred, but never felt compelled to buy the album. I discovered "Better Life" not so long ago on another blog and I really like it. It's a shame that they didn't manage to explore this path further, I'd have like to have heard more.

Another great photo to accompany the song, strangely evocative.