Electricity Comes From Other Planets 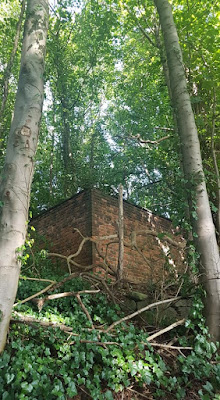 I haven't posted any Velvet Underground on a Sunday for ages (or any other day for that matter but there's something about the 1968- '69 era Velvets that seems very Sunday to me). This song, one of the last of the Cale- period Velvets, came out in the mid 80s as part of the VU album and then again in 2017 as part of the recreated 'lost' 1969 studio album. It's a blast, opening with a superb sounding clipped guitar chord, the sort of chord that makes people pick up a guitar in the first place. Almost immediately there's a funky riff joining in and that pacey rhythm. Lou Reed starts singing all kinds of nonsense while other voices join in off mic and several attempts at backing vocals are made, all very loose. Lou is riffing about where evil lurks and the mirror's edge, New York buildings, electricity coming from other planets, the Pope in a silver castle and Martha and The Vandellas. There's the descending 'wrong, wrong wrong' backing vox part that it's impossible not to join in with and which can get stuck in your head for days.

Temptation Inside Your Heart

I started my Sunday morning listening with Ostle Bay over at The Vinyl Villain, followed by this. Brilliant sunshine poked through the clouds part way through. Perfect.

I'm not a huge Velvet Underground fan but that's one of my favourites and I still don't know why.

Got the VU album the week it came out back in 85. It proved an excellent gateway into the "proper" albums but I think it might be my favourite.

Electricity comes from other planets! Words to live by.
In 1984, Bill Levenson, who was in charge of Polygram's compilations department, or whatever they may have called it back then, sent out feelers to music focused photo agencies, including the one I worked for, to find never before seen or used VU photos. My agency, Star File had a decent VU collection by photographers we represented, but Polygram dangled a carrot of big money for anyone who could bring in former Warhol associated photographer Nat Finkelstein in from the cold. He had become somewhat of a recluse and very, very protective of his work. Well my boss, Virginia, knew her way around an older man and managed to get Finkelstein to allow us to pour through his Factory Era Warhol images. I spent 2 full days in his apartment sorting though negatives and slides that were covered in dust and dog hair, while Nat basically relived the Warhol years from his perspective to me, whether I cared to hear it or not...I did! In the end, a few of those Factory Era shots of the band, ones with Warhol's signature silver balloons, if I remember correctly, made it to the album inner sleeve artwork. My agency had to forego any credit on the album as part of getting Finkelstein on board, but if I remember, the fee Polygram paid made up for it.

Amazing story Echorich. What a job!