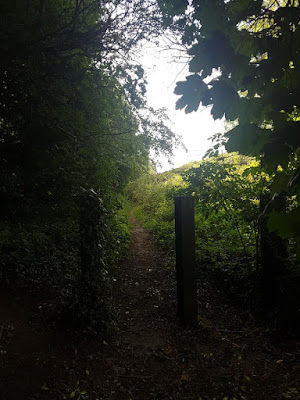 I had a go at writing this post and putting the photo and the Bandcamp player in using Blogger's new dashboard and interface. I tried three different ways to get the picture attached but whatever I did it wouldn't upload, wouldn't Copy and Paste and wouldn't Drag and Drop. The Bandcamp player wouldn't work either- it just published it as a string of code. I need to persist because sooner or later the current format will be removed and we'll all be moved over to the new one but it's looking like a massive problem at the moment.

Manfredas put Pink Industries out in 2014, a weird, lurching crawl with grinding bass and industrial noises. He DJs and makes dance music but this is not conventional music for frugging to.

Richard Norris remixed it in 2017, a psyched out, stop- start chug with lots of droney, tripped out noises playing around at the peripheries and some ultra- reverb laden voices swirling about. I think they're voices, they could be the sound of the stars laughing or abandoned machinery on the edge of a forest crying. You can buy the pair for £2- probably the best value for money you'll find today.

Another blinding brace of tracks. Any initial disappointment I may have felt that this was not a post on Pink Industry the band was alleviated by the fact that both versions sample the bassline from Pink Industry's Pain Of Pride. And are bloody excellent in their own right.

I clearly wasn't alone in thinking it might have been a Jayne Casey type Pink Industry post!
Nice tracks by the way.

I've never posted anything about Pink Industry or Pink Military. May need to rectify that at some point.