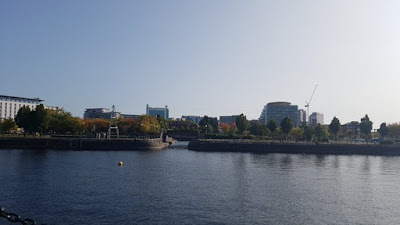 David Harrow, resident of Los Angeles and purveyor of fine dub since the days of On U Sound in the late 80s, has been unleashing weekly releases into the ether, digital dub with acres of wide open space and pressure. The latest one, PurpleCircle (Virus Dub 5), is a delight and is on Bandcamp here. The previous week was Maskup (Virus Dub 4), all smoke, echo, bass and melodica. Nod your head here. They're a dollar each, roughly 98 pence for those of us in the UK.
Less laid back but just as transportative is David's work in the mid- 90s as Technova (recording for Andrew Weatherall's Sabres Of Paradise and Emissions Audio Output labels. Andrew and David began to work together after bumping into each other London's clubs. When David said he had some music recorded Andrew said he'd put it out on Sabres without even hearing it). Tantra, a 1994 12" single and album, is especially good. This is the full twenty one minutes of Tantra, a late night, post club dub techno excursion.
On the B-side Innersphere remix Tantra as Tantrum, ten minutes of trancey- techno workout. Nothing wrong with some techno for Tuesday is there? Certainly puts your head in a different place and shifts things up a gear.
Tantrum (Innersphere Mix)
Posted by Swiss Adam at 08:00

This is great Adam, particularly liking Maskup. The Blood Sugar double pack 12" is still one of my most treasured Weatherall possessions, so nice to hear David still putting out some quality stuff

The 21 minute Tantra is bloody great. Checking out the Bandcamp tunes as I type.