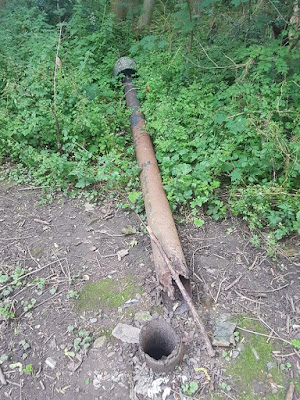 Back in 2015/ 16 (and doesn't that seem like a distant world now?) I posted some songs from a Manchester based guitar band called Multiplier who hit the spot with a sweeping shoegaze/ soundtrack influenced sound and who then called it a day in 2017. Guitarist Phil Hartley moved on to a new project, him and a new singer/ songwriting partner, but that was scuppered by Covid, so he struck out again, making music in lockdown with the self- imposed deadline of writing, recording and releasing a new piece of music every seven days from mid- May. The resulting works have been gathered together into an album under the title Audio/ Visual and using the name Shape And Resolution. Phil's shoegaze and post- punk influences peak through, the shimmer of the guitars, the odd spiky solo and the wash of FX pedals, peppered across the songs that make up the Audio side but just as clear is the influence of TV and film soundtracks as well, the twang of John Barry and echoes of Robert Fripp on the visual side of the album along with the tape loops and washes of ambient sound. Album closer The End. Of Everything is a lovely way to finish it, the cinematic sweep of the music and in your mind's eye the credits rolling, the ending of a film you haven't watched yet.

It's on Bandcamp, a pay what you like/freebie deal. Well worth exploring.

A Great album encompassing everything from John Barry cinematic Bond music to Magazine (John McGeoch being an influence) to Shoe-Gaze (Slowdive) to Dead Can Dance. Great arrangements and production.
Graham Domain - Sept 2020

A Great album encompassing everything from John Barry cinematic Bond music to Magazine (John McGeoch being an influence) to Shoe-Gaze (Slowdive) to Dead Can Dance. Great arrangements and production.
Graham Domain - Sept 2020