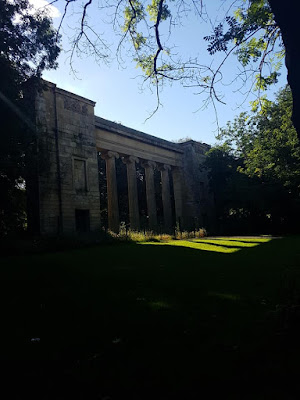 One of the things I gained from lockdown was walking daily and despite being back at work now and being home later I've been trying to keep it going. I walked briefly on Wednesday night, just as it was going dark, and it suddenly felt autumnal with a definite chill in the air, the street lamps all on before nine and everywhere full of shadows. The roads are much busier than they were. Back in April and May another of the small joys of lockdown was he almost complete absence of cars. The A56 at the top our road (Washway Road/ Chester Road/ Cross Street) is four lanes of traffic. In April you could walk down the road- the middle of the actual road- safely. The silence out in the streets was startling. I got a touch of deja vu on Wednesday night, the rapidly falling dark, the chill and the quiet and the route I was taking, took me straight back to late March and those first few days and weeks in lockdown. Back in March I was listening to Four Tet's then recently released Sixteen Oceans album. I'm not sure that Sixteen Oceans breaks any new ground (and Four Tet is an artist who has broken new ground more than once I think) but it does pull together much of what makes him so good. This track particularly struck me- the instantly thumping rhythm track, the swell of finger picked guitars, the two note bassline, the Indian influenced instrumentation and the vibrancy and immediacy of the production- and although I didn't have it playing in my ears while walking on Wednesday night, I could hear it all as I walked.

Insect Near Piha Beach
Posted by Swiss Adam at 08:00

Hey Adam, sounds like you were hallucinating on wednesday night, but very good hallucinations. Nice Eastern vibes. My partner says the track takes her back to her Goa trip in the 90's. Now she is hallucinating,Ha!
-SRC

We live on a main road and I really loved the quietness that descended in March. Typing this a car is going by every 20 seconds on average! I miss the quiet. I have changed my car use, it is only used for work and the weekly shop now, never jump in it to go to the shops now and the boys are getting pissed off with my "take your bike or walk" every time the boys ask for a lift to the park or their pals.

I haven't given this album as much time as I should have partly because I have refused to rip it after not getting a response from Hebden as to why no dl. Petty I know but that's me.

Sixteen Oceans has been a regular listen since it came out in our house.Our eldest (14) after hearing me play Teenage Birdsong a few times declared it Goth music.

Living near Heathrow, the M3 and the M25 as I do, the quietness and calm that descended in late March was indeed completely blissful. I too walked every day and cycled a bit too. Your mixes were a great accompaniment, especially during the evening ones. I miss the quiet like others on here.
Good song, hadn't knowingly heard any Four Tet before, although I think they played at Green Man Festival when I went in 2005.