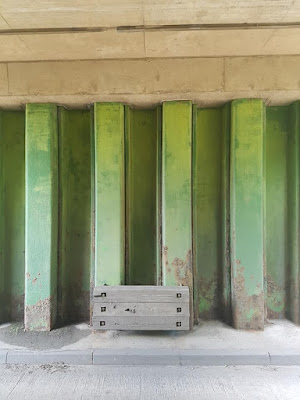 I've been playing a lot of Durutti Column recently. Their second album, 1981's LC, has been on a lot, as has 2010's Paean To Wilson, the 1984 12" single Without Mercy (two long form musical pieces recorded at Tony Wilson's suggestion with students from the Royal Northern College Of Music), the recent re- release 7" single Free From All The Chaos dropped through the letterbox not long ag and I keep returning to 1989's Vini Reilly album.

In an attempt to pull some of this together into one place I've put together an hour of Durutti Column songs in the mix below, this selection all from the 1980s, and called it Sketch For Vini 1. It's not meant to be definitive or a Best Of The Durutti Column, just some of my favourites stitched together, starting with some of Vini's early work with Martin Hannett, then him being joined by Manchester legend Bruce Mitchell and the expanded line up in the mid-80s with viola player John Metcafe and Pol singing. Some of these songs are ones I've been listening to for the best part of three decades now and still don't get tired of- Sketch For Summer, Otis, For Belgian Friends, Bordeaux Sequence, Jacqueline, Sketch For Dawn 1. There's something unique and very affecting about Vini's endlessly inventive guitar playing, his tone and sound, his use of echo, delay and chorus, and despite what Tony Wilson said about it, his voice too. I'm going to follow it with Sketch For Vini 2 at some point, going into the 90s and beyond. The Mixcloud player won't embed- ongoing problems with the new Blogger- but you can find it and listen here. Hopefully it'll hit the spot for a bright autumn day in September.

This compilation was the perfect start into my Sunday. Thanks for this great work Adam

That's my commute playlist sorted for this week! Many thanks. Any word on how Vini's health is these days?

There were some photos of Vini on a DC Facebook page taken recently where he looked much better, a photo with Bruce both smiling and a clip of him playing guitar.

Another great mix, Adam. I agree with your comment about Vini's voice: it's used sparingly but when it is, it always feels right for the song. I'm not familiar with the majority of DC albums, so this was an affecting and perfectly sequenced selection. Thanks!