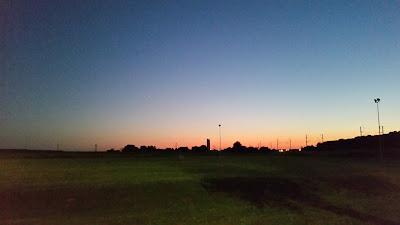 This photo was taken at dusk somewhere near the French/ Belgian border in July 2016- I remember the date but not the exact location. I'm going to say Belgium because that allows my tour of Europe through holiday photos to extend into another day and the excuse to post some Belgian New Beat.

In 1987/ 1988 northern France and Belgian clubs played a style of music known as Electronic Body Music, a hard edged dance music made by groups like DAF, Front 242 and Die Krupps, a sort of tough punkish dance music. At the Ancienne Belgique nightclub in Brussels DJ Dikke Ronny accidentally played Flesh by A Split- Second at the wrong speed, 33 instead of 45rpm, but with the pitch control at +8 and the crowd's reaction sent him looking for other records to pitch down- repetitive beats, sequenced basslines, sirens, sampled voices slowed down issuing commands.

Early house records fitted in with the sound as did records by 80s electronic artists such as Fad Gadget and the techno and acid coming out of Detroit and Chicago in the late 80s. The scene was short lived, eventually replaced by house, but the This Is New Beat compilation spread the sound beyond Belgium. This track, a collision of acid and New Beat was made by Italian Bruno Sanchioni under the name Dr. Phibes and released on Belgian label DiKI Records in 1988, sparse, hypnotic, underground music.

A couple of visits to Belgium in the mid 90s made me realise just how much they loved their techno; they couldn't get enough of it in the clubs.

Not Dr Phibes and the House of Wax Equations then?

No, a different Dr Phibes. I have blogged about DPATHOWE many years ago, saw them play in Liverpool way back, c1989/90. Think I may have a 12" by them too.