Too Bad She Won't Live... But Then Again, Who Does? 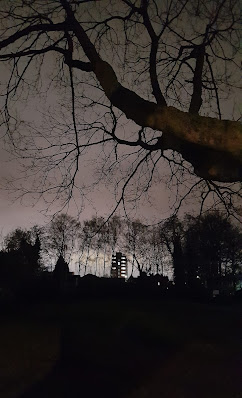 'A new life awaits you in the Off- world colonies! A chance to begin again in a golden land of opportunity and adventure!'

Two weeks ago I published a post about Blade Runner and the long lasting impact of Vangelis' music from the 1982 film. The soundtrack, held up for years in legal disputes, eventually came out in the mid 1990s and included pieces of dialogue from the film among the synths and timpani to great effect. For some time there have been a series of bootleg editions of an album called Blade Runner Esper Edition, originating (I think) in 2001 on CDr. The Esper Edition is the full, proper soundtrack to Ridley Scott's film, an ambient/ musical edition across two discs, the score as well as music from the film itself, the dialogue (but not Harrison Ford's controversial film noir voiceover) and all the noises from the film- the rain, street sounds, voices, gunshots, the Voight- Kampf machine, hovercars, footsteps, all the ambient background sounds of Los Angeles in 2019 (or the Blade Runner version of it). You can fall down some internet wormholes looking at all the different bootleg editions that have been produced, various claims to be definitive and better or best quality. This one seems to be highly rated and to my ears is as good  as you're going to need.

And if you want to go deeper and further Youtube is full of parts of the soundtrack slowed down for a long, soft, ambient drone, white noise and Vangelis six hundred times slower than intended- this one, Blade Runner Blues slowed right down is a beautiful way to spend an hour.

Damn. Didn't we just have Christmas? Thanks for this.

Truly brilliant photo at the top there SA.

Thanks C. I was quite pleased with it, the lights in the tower block and the tree line especially.

I've been listening to the Esper Edition all weekend and I keep finding that I have to stop what I'm doing and just lose myself in the soundscape. Truly magical. And as C said, the accompanying photo was particularly evocative of the final scenes and the (deluded?) promise of escape. Expertly done.

I keep coming back to it too Khayem. For what should be background, it's very enveloping.