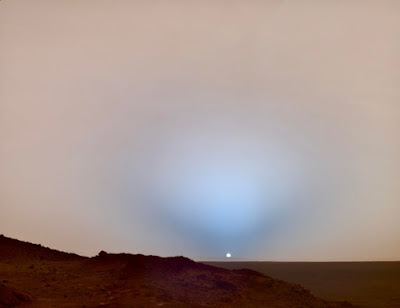 This is a photo of sunset on Mars- clearly not my picture- a blue sunset, caused by dust scattering the red light of the sun. It is one of those things which fries my mind if I think about it too much, as does the landing of the rover Perseverence on Mars. That something made here can end up there and send back photos such as this one is incredible. As a kid of the 1970s and 1980s we were drip fed science fiction, from the obvious films such as Star Wars to the near constant re- runs of Star Trek (the original 1960s version, I must have seen every episode), the re- runs of the black and white Flash Gordon and Buck Rogers 1930s series and the more British and more violent 2000AD comic, it was a part of the culture. Paperback books were cheap and passed around- Isaac Asimov's novels, Frank Herbert's Dune, The Hitchhiker's Guide To The Galaxy (book, radio, TV), Ray Bradbury, Harry Harrison's Stainless Steel Rat. All of this must have been the long tail of the Space Race, the USA and USSR competing to put their satellites, dogs and people into space. The moon landing happened ten months before I was born, the peak of the space race. After that it was all downhill but the science fiction was everywhere.

By the 1990s science fiction seemed to have peaked but the sound of science fiction and of space travel/ exploration was taken up by musicians and producers, particularly those with access to samplers and synths. This week's long song comes from 1994 and the electronic ambient of Mysteries Of Science (Dominic Woosey). Twelve minutes of stellar melodies, long washes of synth and pattering rhythms, all taken at a glacial pace. A warm, emotive, spaced out drift through space and time from a self titled debut album (recently re- issued). The follow up a year later was called The Erotic Nature Of Automated Universes. All very sci fi.

When lockdown began almost a year ago, we didn't have any online teaching going on. It was left up to the parents. In my son's history class I had the pleasure of teaching him about the '60s. We spent a couple of days on the race to space, and my favorite part was explaining to him how pop culture became obsessed with space travel and the moon. I was able to pull out one of my all-time favorite albums, Mel Tormé's Swingin' on the Moon. Every song has moon in the title. Check out some of the lyrics to the one original song on the LP written by the Velvet Fog himself:

Let's have a honeymoon on the moon, honey
Far from the noisy earth below
And if your mama asks, "Why the moon honey?"
Just tell her your feller has gone inter-stellar

Grab your hat and we'll head off in the blue
In a lit-tle rock-et built for two
Baby, we're gonna blast off and before we're through
We'll leave the cares that we know on terra fir-ma below
While we go singin' and swingin' on the moon

Hey, let's grab a holiday on the moon, honey
Far from the hustle of the crowd
And if your folks ask about our house, honey
Tell mater and pater we live in the crater

We're really gonna enjoy a life of ease
Livin' on moonlight cocktails and green cheese
Mister and Missus Space Commuter, if you please
And in a few years we might produce our own sat-e-lite
While we go singin' and swingin' on the moon