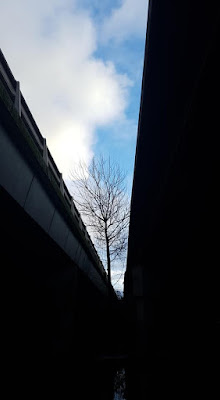 Hey, February! Nice to see you. No offence to January- usually a month of restarting, reflecting and re-setting and requiring a certain stoicism and some austerity- but that was the worst, longest January we've ever had and it can, in no uncertain terms, fuck the fuck off. Will February be any better? Probably not but at least it's only twenty- eight days long, not thirty- nine like January was.

Amor are a Glasgow based four piece centred around the talents of Richard Youngs, a man with umpteen albums behind him. They make dance music, a sleek, analogue, DIY, post- everything, Balearic/ avant disco approach to dance music, laid back and slinky with catchy vocals, rubbery basslines and beautiful melodies. Amor's new four track EP has just come out, available digitally at Bandcamp and in a limited edition of 500 12" singles, a work in collaboration with Lemur. All four songs are superb and wind their way around you. Fear is eight minutes and eight seconds of naggingly brilliant toplines and riffs, funky drumming and Richard's upper register vocal. For You is early 80s New York beamed into 2021 Glasgow, Talking Heads and Arthur Russell out for the night. Unravel is seven minutes of magic and already sounds like a future classic- synths and an earworm of a bassline and then Richard singing, 'I'm finding myself in your smile/ Always unravels me'. The piano chords hit the spot and then there's a ray of sunshine in the lyrics, to see us through the darkest of winters, 'The earth shall rise again'. Beautiful, hypnotising and just what we need.

Back in 2017 Amor's Paradise single, their debut recording and release, was one of the highlights of that year . I have really strong memories of driving through the Vendee region of France with this playing on the car stereo, the Atlantic coast coming into view, two weeks of holiday ahead of us.
'We're calling from paradise/ can you get through?'

Strange but even although we were in lockdown it seemed like the quickest January that I can remember.
Maybe because I'm now alternating between the office and working from home.

That's interesting CC. December seems ages ago now to me. Just shows time is relative and all that doesn't it?

I can agree to Stevie. January passed away so soon and I ask myself where time has gone. Looking forward to AMOR to arrive at my place.

Richard Youngs' vocals sound so familiar. It will come to me... Loving this song. January was the month where being home all the time really started getting to me. I have been quite short with everyone under this roof. Better not start typing "All work and no play makes Jack a dull boy" over and over.