The Kind Of Love That Leaves Me Burning With Desire 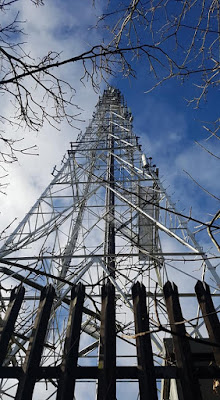 Last year was the thirtieth anniversary of the release of Happiness by The Beloved, an album which is wall- to- wall, smile inducing, MDMA fuelled, dance- pop. By 1989 the two members of the group (Jon Marsh and Steve Waddington) had seen their line up slim down from a guitar- based four piece, heavily influenced by New Order but not really heading anywhere in particular, to a duo acquiring a drum machine and a sampler. Jon had been to New York in 1987 and when he returned to London began to throw himself into the new sound, both him and guitarist Steve becoming enthusiastic attendees at Shoom! and Spectrum. Happiness is one of 1990's key albums, loved up, hedonistic, bright eyed and wide eyed with tunes aplenty. If you want to see the effect that the period had on them, this version of Your Love Tales Me Higher is perfect, a shuddering, body shaking jolt of love, lust and electricity that may rewire your central nervous system.

An amazing track, this is now the 11th version/remix of Your Love Takes Me Higher in my collection and I don't tire of listening to any of them. I really liked Forever Dancing after hearing it on the CD88 compilation and the next song I then heard was Acid Love, so YLTMH seemed like a perfect progression. Happiness is a brilliant snapshot of the time and great to see that it's had a 30th anniversary reissue. I'm familiar with some of the demos and rarities as they were available years ago as free downloads on The Beloved's website. The Mark Goodier Evening Session version of The Sun Rising is another winner.

Funny you mention the Evening Session version of The Sun Rising, I very nearly posted that as well.

Lots of bands tried the "indie guitar to dance" leap but The Beloved did it better than most, and with a lot more panache too.

Panache is the word Nick.

Very few artists captured the zeitgeist in a bottle (excuse my fixed metaphors). Happiness and Blissed Out did that for me.

When most people feature The Beloved they veer towards well deserved adulation for The Sun Rising. It is a magnificent song. In every single version, it is a Balearic masterpiece. BUT....
For me the song I will always return to is Your Love Takes Me Higher. No other Beloved song makes the hair stand on my arms or the back of my neck! Jon Marsh's laid back urgency, yes that is a thing, in his vocal is an aural drug all on its own. It's a track I get lost in every time it's played. Your Love Takes Me Higher, is trancey, acidic, hard edged, polyrhythmic - just fascinating. It's Four On The Floor, foot stomping goodness. This stripped back and acidic demo may be a demo, but the strength and commitment Marsh and Waddington had in the direction they had chosen is on full display.