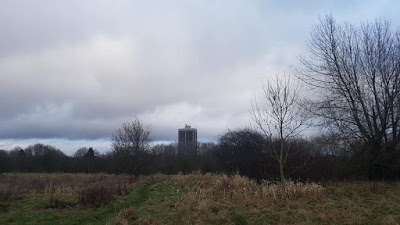 More music for a jingle jangle morning, this time from East Village. Vibrato is short, only one minute fifty- six seconds, but very sweet. It is the sound of The Byrds transplanted to the Home Counties in 1991, guitars ringing and drums thumping in before the chorus and vocals sunken in the mix.

East Village were blessed with three songwriters and vocalists and some really strong songs. Despite being on not one but two of Jeff Barratt's labels (the short lived Sub Aqua and the currently thirty years old Heavenly) they never really made the breakthrough their music deserved, always the support band, their albums released posthumously, cult status after they split. Maybe in the long run it's better that way- don't implode, don't fall out, don't end up kicking your guitarist out of the Transit van at Bristol services and driving off without him.

That would've made a great tour bus video!

Hi. Can you check the link to the track, it doesn't work for me (it tries to fire up a Blogger edit window...)

I had a few issues with this post last night. Will fix the link when I get home later. Apologies for any jangle inconvenience caused.

Great band, should've been bigger. Good live too. I think a couple of them ended up in Saint Etienne's touring band.

Link should be fixed now.

Often these things take time. It feels like East Village has been getting their due now. Being reissued all over the place. Next up is a 7" of Back Between Places with a fresh mix by the fellas. Will be out on Optic Nerve in August.