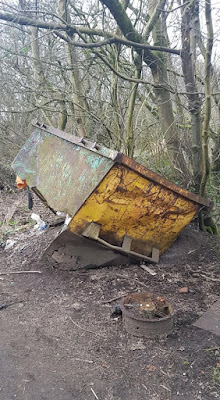 One of my favourite songs of last year was Formerlover's Correction Dub, a track released on a compilation called Galactic Service Broadcasting Vol. 1 last May. Justin Robertson and Sofia Hedblum combined dub space and bass with Nigerian rhythms and a vocal giving instructions and asking questions via a late night chat line. Video here.

In September last year there was a second Formerlover release which to my shame I missed until this week. Bassline from Jamaica, percussion from Lagos, slide guitar from the Delta, echo from the 1960s, a surf guitar lick, a Miami beach vibe, another unmissable vocal- not only do these seemingly disparate influences work together really well but sound like they were made specifically for each other, like four different records playing at once. Buy it and a dub version at Bandcamp and put some shimmy into your Friday.

I like the sound of Formerlover, I'll check them out.

You were posting a series of photos taken on your travels, that holiday week in the skip must have been fun. :D

This travel was much closer to home and wasn't a holiday.

I ran out of inspiration for the holiday posts.

Thanks for sharing this discovery. Lovely sounds!