Take A Look Around There's Something Happening 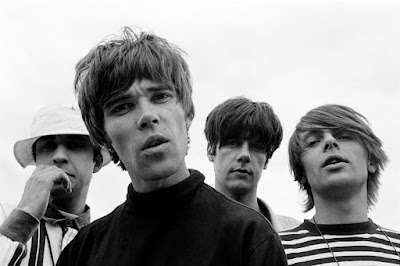 Drew pointed out on Twitter at the weekend that today is the 30th anniversary of the release of The Stone Roses debut album, 2nd May 1989. I've thought about this fact a bit in the days since. At first I thought I wouldn't post anything about it as a) I've covered The Roses fairly extensively here and recently too with three posts about their backwards songs b) posting about album's birthdays runs the risk of falling into a nostalgia trap which I try to avoid maybe not always successfully and c) I wasn't sure I had anything to add. Drew asked me how the thirtieth birthday made me feel? Old, Drew, mainly it makes me feel old.

In May 1989 I was a couple of weeks short of turning nineteen. Two days after the album was released, 4th May 1989,  I saw them play in the Haigh Building at Liverpool Poly. I don't think when I went to the gig I realised the album was out, being less well informed than we are now, pre-internet. For the record the gig cost £3.50 and I still have the ticket somewhere. The album came out with little fanfare to some lukewarm press reviews but began building a word of mouth buzz during the course of the long tour they undertook to promote it and some increasingly breathless live reviews in the weeklies. The Haigh Building was a small venue and rammed the night they played. I don't think I've ever seen a band that had the effect on me that The Roses had that night, playing a set of songs many of which I hadn't heard before but which fried my brain. Of the eleven songs they played I'd heard four- Sally Cinnamon, Here It Comes, Elephant Stone and Made Of Stone. There was virtually zero audience interaction- at one point Ian stopped between songs to ask who'd thrown the lemon on stage- but they had charisma and a diffident confidence, John's fluid guitar, Mani's rumbling, melodic bass and Reni's effortless drumming and harmonies. Ian swayed and bobbed at the front, eyes half closed and microphone in hand, calmness lost in the swirl of song around him. They started with I Wanna Be Adored and finished with I Am The Resurrection, just under an hour on stage, no encore. Head spinning psychedelic songs, 60s inspired but with enough of the late 80s in them to avoid being just retro or revivalist, and judging by the audience, hair starting to grow out and clothes starting to get baggier, fervently mouthing the words to the songs, something was stirring, something was about to happen. I got the album the next day.

I was going to go through the record song by song but you don't need me to do that and I've written about most of the songs on it before. In the middle of side two, before the glistening, heart stopping dynamics of This Is The One and the full on arrogance plus freak out of I Am The Resurrection is Shoot You Down, a full band song with smoky, late night vibes, softly sung vox and brushed drums, guitars by Hendrix if he'd been from Chorlton-cum-Hardy not Seattle.

This one was recorded for the album but didn't make it, was played live all the way through the tour and at Spike Island just over a year later. It finally saw the light of day on a cash-in 12" released by Silvertone years later, the label the band were in dispute with and taking to court to get rid of. A minor classic, rolling drums and bass with droplets of guitar, the sound of early summer, freshly mown grass and rain after sunshine.

There's an audience recording of the gig at Liverpool Poly here. They used to sell these bootleg cassettes, often terrible recordings with shonky home made covers. I bought quite a few before I learned my lesson. This one is good though and shows Ian's vocal issues weren't always a problem.

In an internet coincidence I came across these on Twitter, songs from the album re-imagined as Penguin book covers (done by Barrabas Youngblood). I love the This Is The One cover, taking the 'girl consumed by fire' line as its starting point, and the way the art for Waterfall and Don't Stop are inversions of each (as the songs are too. Waterfall's lyrics tell of a girl getting out of her home town and dropping LSD on the cross channel ferry, 'lifting the lids of her eyes', an archetypal 80s Roses lyric). Bye Bye Badman is superb too, the cover depicting the song's Paris '68 riots theme (also the origin of the lemon motif, an antidote to the effects of CS gas according to an old man they'd met in a pub).

The opening line of the second verse of Waterfall asks the question 'now you're at the wheel/ tell me how, how does it feel?' Thirty years on it makes me feel old Ian, there's no getting away from it, but listening to the songs (and hearing my 15 year old daughter singing them round the house) they make me feel young too, not as young as I was in May '89 maybe, but young enough. 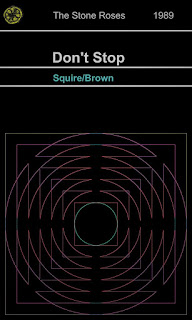 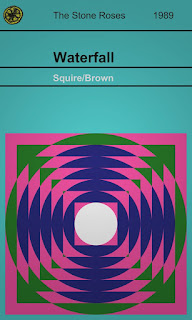 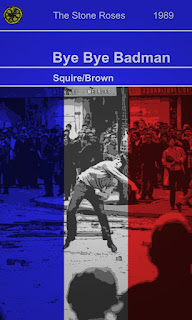 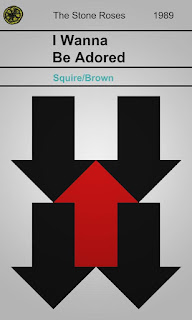 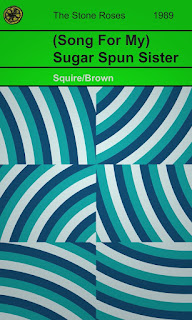 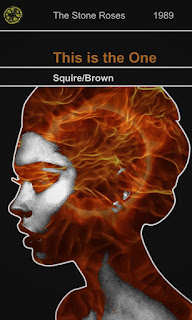 Great post SA. I am going to sit with no distractions and play my rather scuffed copy of the album tonight, bought with some of the money I got for my 20th birthday. Fuck!

I saw The Stone Roses play at Norwich Arts Centre the following month. The venue has a capacity of around 250, but there were probably only around 75 people in there that night, a dozen of whom I'd driven on a min-bus excursion that I'd organised from my shop. The sound was very good. I vividly remember Mani's rumbling bass, Ian's bongos and also that a considerable amount of dry ice was involved. The band and remaining few audience members (mainly my party) adjourned to the street after the show for a, ahem, cigarette or two. We all chatted for half an hour or so. They were good geezers, one and all.
Flash forward 15 years by which time I was actually living in Norwich, sitting in a pub with friends after work one evening. We were each exchanging stories about bands we'd seen when I happened to mention the Stone Roses gig. A complete stranger walking behind me with a tray full of beers overheard my comment, stopped, put down the tray, apologised for interrupting and insisted upon shaking my hand because I'd seen the band he loved so much, but assumed he'd never get to see himself. I like to think that his wish was eventually fulfilled when they reunited a few years later.

I was too young and born in the wrong place to have seen them at the time. I only turned 15 after the album came out and lived in the very north of Ireland, out in the sticks far from the "cold and lonely" streets but their songs hit me in the gut, a punch I've never really recovered from. It still sounds so truly wonderful after all these years as I listen to it now.

Unlike a lot of bands from that time, the Roses found a groove, and locked on; never letting go. Which is probably why it sounds so good 30 years later.
Always a millstone tho', bands who record something so seminal so early in their career.

Heck of a millstone in this case. Part of me wishes they'd released nothing after Spike Island and just disappeared, leaving this album and those few singles as their sole legacy.

There's no better feeling for a music fan than to be on the ground floor of something special at a show like that. I also get what you mean about releasing nothing after Spike Island and just disappearing. There would be no arguing their legacy.

A genuine word of mouth record. If memory serves the initial NME review was very lukewarm. Could definitely do without the post-Spike Island baggage. The Bye Bye Badman book cover is lovely.
Beautifully written, by the way.

Thanks Darren. The NME gave it 6/10 I think, lukewarm indeed.

Thanks Swede, 2 brilliant Roses stories. Both show the impact they had.

Yes. 6/10. Just checked. Jack Barron was the reviewer. He was a decent writer, with good tastes. Though I seem to recall that an interview with De La Soul sent him loopy.
The days when the weekly music press were the be-all and end-all. Long gone, sadly.

Late and slightly off topic but I want to put this one on the board: the most underrated thing they ever recorded is What The World Is Waiting For. Understandably overshadowed by the monster Fools Gold, if you go back and listen to it clean it's an absolute stormer. Just a titanic record. It's also the direction they should have gone in, indeed given that WTWIWF was the original A side it was the direction they were intending to go in - the success of FG derailed them in my opinion. Whereas FG is almost a novelty - how could it ever be repeated? - WTWIWF does a brilliant job of fusing the 60s retro, the dance funk, and the cusp-of-the-90s optimism that they'd brought to the table, and is at the end of the day the only thing they did that actually delivered on the real promise of the debut album. Yet it's hardly mentioned even by diehards.

I think you're right Swanditch- I loved WTWIWF at the time and since, it is the lost song in their back catalogue in a lot of ways.