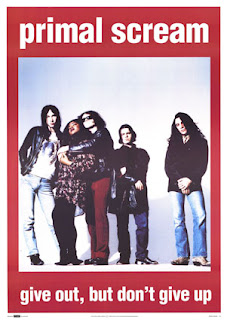 While things are all Screamadelic in various pockets of internetland I thought I'd post this- the Terry Farley mix of Loaded, which appeared on the Creation dance compilation Keeping The Faith (various Keeping The Faith tracks have been posted here at Bagging Area during the year). In this reworking of Weatherall's Loaded Terry Farley pretty much keeps Loaded as it was and puts Bobby's vocal from source track I'm Losing More Than I'll Ever Have back over the top. When I previously posted a Terry Farley remix a regular reader left the comment 'I'll remain anonymous for this one- great track but Terry Farley is an elitist knob'. Bagging Area cannot comment on this claim. Mr Farley remains unavailable for comment.
09 - Primal Scream - Loaded (Terry Farley Mix).mp3#1#1
Posted by Swiss Adam at 09:17

Sounds funny- where are the comments?

In the faith web fanzine forum -

You've to sign up to view, but there is some pretty good mixes they post in there...

Always thought that the Boys Own lot were a bit elitist, all that sneering at folk in the fanzine, think they though they were a bit special. How the fuck can someone who was once a gas fitter be elitist.