A Nice Little Pub In The Middle Of Nowhere 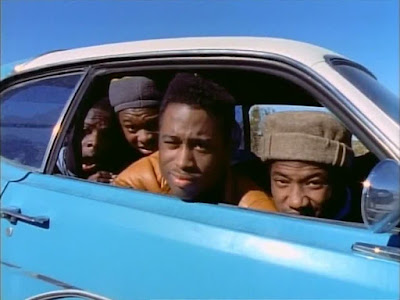 More golden age hip hop for you today but seriously less angry than Public Enemy's 1989 single Fight The Power that raised the temperature here yesterday. I've been meaning to write about De La Soul and their thirty year old debut album. I was listening to Eye Know recently and it sounded ace, really fresh and inventive. But instead today we have De La Soul's Native Tongue's compatriots A Tribe Called Quest. The group's debut single I Left My Wallet In El Segundo came out in 1990. A year later it was remixed by the then fairly unknown Norman Cook and this version was put out as a promo. Norman samples/borrows liberally from/rebuilds the song entirely around Donna Summer's State Of Independence. El Segundo's rap is led by Q- Tip, whose lighthearted drawl sounds wonderful. He narrates the story of coming into some cash, heading south to Mexico and the dangers that lie within- buying gas, eating enchiladas and at the moment of payment being so distracted by the beauty of the waitress that you forget your wallet. Easily done.

As a bonus track here's Donna's sublime early 80s single. State Of Independence was written and originally recorded by Jon and Vangelis. Donna recorded and released her take on it in 1982, a lolloping reggae based groove with sunshine drizzled all over it and Quincy Jones at the controls.

Bonus, bonus track. In 1992 State Of Independence was covered by Moodswings, laid back, downtempo house groove with Chrissie Hynde and Martin Luther King on vocals. Moodswings were James FT Hood and Grant Showbiz. Grant spent his 80s being road crew and guitar tech for Billy Bragg and The Smiths.I'd imagine being a roadie for The Smiths involved moodswings on a daily basis. The version here is nine minutes of bliss.

You already had me listening to Donna Summer since showcasing I Feel Love a while back. A fine collection of songs today.

I wrote recently about Eye Know, and now it turns out, just as I thought I'd caught up, I know (see what I did there?) nothing. What a collection of utter tunes. Cheers.

It was you posting Eye Know that made me realise I'd missed the boat with a DLS post.