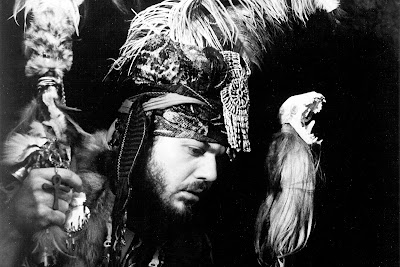 Every week seems to bring another RIP, another musical maverick gone. This week brings the news of the death of Dr. John (Mac Rebennack). In 1968 he recorded the album Gris Gris, a debut that built a completely self contained world, swampy rhythm n blues, Louisiana voodoo, New Orleans funk and psychedelic rock. Sonically it is far out, voices appearing suddenly out of the mix, ominous and acidic, with tales of witchdoctors and curses, Dr. John's slurred drawl winding its way though the songs, the lyrics a mixture of Creole, patois and slang. A spooky listen if played late at night in the gloom but a brilliant, innovative and individual record. This song works on any compilation or mixtape, a genuinely brilliant song- 'Je suis the Grand Zombie... with the King of the Zulu'

I Walk On Gilded Splinters

He reappears in my record collection a few times- a CD compilation album spanning his career up to the 90s with Iko Iko, Right Place Wrong Time and Junco Partner. In the 90s he played on Spiritualized's Ladies And Gentlemen We Are Floating in Space, a record that deals with drug addiction, something Mac Rebennack knew about having fled to London in the 80s to kick his own heroin addiction. In 2012 an album recorded with Dan Auerbach which recaptured some of the Gris Gris spirit and sound. RIP Dr John, the Night Tripper.
Posted by Swiss Adam at 08:00

I too was a fan. This is the first time I ever saw him. In 1981, John Candy loved his music and wrote a skit around having Dr. John in as a musical guest. It was a spoof of Chinatown called Polynesiantown. Here is the ending:

And here is Dr. John performing in the "movie." This is what started it all for me.

Personally, his performance at WLIR-FM out of Hempstead, Long Island in June of '73 is right up there with my favorite live albums. His cover of Mess Around is perfection. RIP, Dr. John. You were one of a kind.