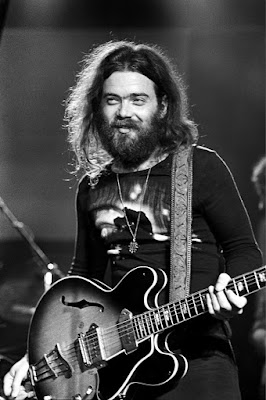 Rest in peace Roky Erickson. I can't remember when I first heard 13th Floor Elevators- it would most likely be through a compilation, Nuggets maybe, or a tape someone else made. They were a band whose name was always thrown around by interviewees and the music press in the late 80s. Julian Cope seems to be a likely starting point. Primal Scream covered Slip Inside This House on Screamadelica. From there on in, pre- CD reissue culture, it was a matter of scouring second hand shops and stalls and taking a leap into that lysergic world. Without a shadow of a doubt, without Roky and The 13th Floor Elevators leftfield, alternative music would be a very different place- You're Gonna Miss Me is one of the foundation stones of psyche-rock. He died on Friday aged 71. RIP Roky.

You're Gonna Miss Me

She Lives In A Time Of Her Own
Posted by Swiss Adam at 08:00

I think the 1990 tribute compilation Where The Pyramid Meets The Eye that featured the Primal Scream cover and a fantastic JAMC version of Reverberation (Doubt) was my first encounter with him. Quite a guy, RIP.

You're Gonna Miss Me's inclusion on the Best of Pebbles Vol 1 was probably my intro, followed by much homage from Spacemen 3 and the Mary Chain. The light that burns twice as bright burns half as long, and you have burned so very bright Roky. A sad day.