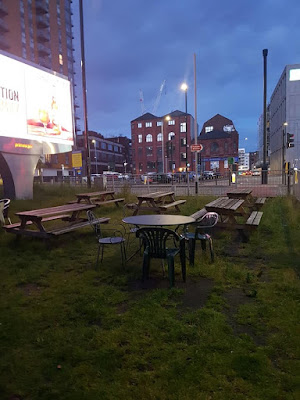 Out in town on Saturday night we ended up in a pub at the northern end of the city centre with a decent selection of music playing. Mazzy Star's 1994 single played, the sort of song that can silence a pub- it didn't silence us, we discussed the various attractions of the song and its singer.

Lovely isn't it? Acoustic guitar, a slide guitar part, a lazy drumbeat and Hope Sandoval's wondrous, hazy vocal. A song that is is much more than the sum of its parts, its all about the playing, the performance and the dust and heat that it evokes. Deserts and lust and suchlike.

In 2013 J Mascis recorded a cover version which is pretty wonderful in its own right, twin acoustic guitars and J's cracking, weathered voice.

More J Mascis for me to get my teeth into!

The Richard X version ("Into U")is well worth a listen too. Jarvis' completely different lyrics almost (but not quite) make up for Hope Sandoval not being on it as much as she should be.

Yep, I like that version too. I posted it many years ago.