You Made Me Realise 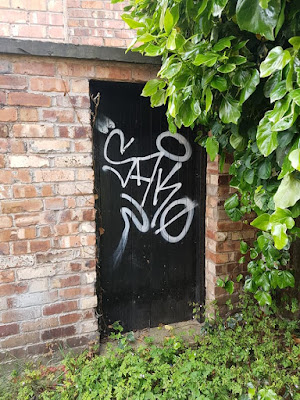 Each day on Facebook I post a link to that day's Bagging Area blogpost- I like to keep Mark Zuckerberg updated with music from the last few decades although he never comments himself or thanks me. When I published Tuesday's post- Galaxie 500's Blue Thunder from their 1988 On Fire album- a friend thanked me for reminding them of the song and album and posing the question 'why was 1988/89 such a fruitful time?' I replied and then thought about it a bit more.

The reason for the explosion of dance music and acid house in the years 1988-1989 has been well explored and well documented. In summary, in the north Mike Pickering had recently returned to Manchester from Belgium and headed Factory's A&R. He was also given control over the musical policy at the Hacienda. Dave Haslam's Temptation night was growing but from opening in 1983 the nightclub was often largely empty (and open almost every night). In its first few years it was more gig venue than nightclub. Pickering began to play the music that excited him, the new music coming out of the USA, house music from Chicago and techno from Detroit. At a similar time Shaun Ryder and friends developed a sideline to being Happy Mondays, importing ecstasy and selling it in the Hacienda. The combination of music, nightclub, youth and drugs quickly gathered steam. In the south a similar revolution took place but this time starting with four friends (who were also DJs) who spent a summer in Ibiza dancing to a wide variety of tunes, including some of those early house records, in open air nightclubs under Balearic skies fuelled by the same pills the Mondays had discovered. When they got back to the UK they decided to try to re-create this scene in London in the autumn- Paul Oakenfold, Nicky Holloway, Johnny Walker and Danny Rampling. Within months Spectrum, Shoom and The Trip opened. Acid house ensued.

The reasons for guitar music entering such a fruitful period between 1987 and 1989 are maybe slightly different. The bands putting records out in the late 80s were at the tail end of what had started with punk, in particular a model of Do It Yourself. An entire system of independent record labels was well established with a distribution model that got records into shops all over the country while avoiding the majors. In the US the bands inspired by punk had spent years criss-crossing the states building up a network, playing gigs in clubs and bars, meeting promoters, fans, fanzine sellers and the DJs from late night regional and college radio stations. In the UK John Peel existed as an outlet for even the most experimental and outlying bands and getting played by Peel was a reasonable ambition. The weekly music press (three papers remember, Sounds, NME and Melody Maker) had pages to fill, with opinionated and passionate writers and they held real sway and influence- NME Single Of The Week felt important. The post-punk period of roughly 1978-83 extolled being experimental, sounding like yourself and independent, leftfield, leftwing values. Technology was available and cheapish so recording a decent sounding demo tape was attainable. Cassettes were cheap and easy to reproduce and could be sent off to Rough Trade or Creation or 4AD or whoever. By 1988 this was all well established and bands had a mains to plug into, plus the back catalogues of the psychedelic groups of the 60s, the girl groups, the proto punks of The Stooges and The Velvet Underground, Nuggets and punk and its aftermath found cheaply in second hand shops or taped onto cassette with hand written inlay cards.

I think there are two other explanations- bear with me, if you're still reading and I fully understand if you've clicked off and gone elsewhere- and which are specific to the 1980s. Firstly (and Aditya agreed with this on Facebook) one reason for the boom in guitar music was state funding of bands and music- the dole and to some extent the student grant which sent young people from all backgrounds to university or polytechnic or art school. The dole and education grants gave people the income which bought them space to create. It wasn't much, there was just enough income to survive week to week but it was guaranteed as long as you met a few basic criteria (turn up at the job centre once a fortnight and sign on, turn up at lectures and hand an essay in once a term). Many of the British bands of the 80s came from dole culture. Some of the labels were funded by Thatcher's enterprise culture- there are several who got a business grant or loan to start up. As Aditya put it on Facebook yesterday 'You need a guaranteed income if you're going to try anything highly speculative, such as writing a 20 minute white out in the middle of You Made Me Realise'.

You Made Me Realise

Today's young people have to pay for their further education and the Tories have completely monetised university education, made it a financial transaction- what you are going to earn and how you are going to pay it back are the primary considerations. Leaving home to go to a new city, do a philosophy course, form a band, mess around and take your time doing it, are no longer possible (or valued). Trying to exist on the dole while putting together guitar, drums and bass seems increasingly unlikely.

The second explanation could be this- the 1980s were a polarised and confrontational period. You picked your side and it informed all your decisions. I saw a Tweet recently from someone disgusted by Morrissey and his appearance on US television wearing the badge of a minor British fascist organisation. The Tweeter said something along the lines of 'in the 80s The Smiths were my gateway into an outsider life, of books, music, cinema and politics. Morrissey formed my adult life'. As an aside the fact that The Smiths had split up in 1987 possibly also accounts for something here, a gap where they had been now existed. But to get back to the point, the polarised world of the 1980s meant that making experimental/challenging/lo-fi/home made/trippy/weirdo/out there/leftfield music was a way of life and a basic requirement. The mainstream was the enemy and to be avoided at all costs. Rick Astley, Phil Collins, Queen, Elton John, Michael Jackson, Billy Joel- whatever you think of these artists now (and I still can't understand why some of them have been allowed back in)- were to be repelled and pushed away from. Bands defined themselves by this, by being outsiders, by taking a stance. Every town had a nightclub that had an alternative night, usually a Monday, when it would otherwise be empty. The music was an alternative to the charts and the mainstream. Lionel Ritchie or My Bloody Valentine? Stock Aitken and Waterman or Creation, 4AD and Factory? Queen or Sonic Youth? Tango In the Night or Surfer Rosa? Bad or Bummed? Thatcher's Britain and Reagan's America and the glossy, bright, mainstream culture that it spewed forth brought about cultural reactions- the guitar groups instinctively knew this and responded in kind.

Ten years later this oppositional approach was gone- guitar groups, especially Oasis, sneered at what they saw as small time bands and a lack of ambition and wanted sales, number ones and stadium gigs. Naked ambition and a mainstream sound was in- Morning Glory and Urban Hymns are mid-tempo, smooth-edged, mainstream rock, rather than that gateway into a hidden world the Smiths fan I mentioned earlier found with guitar music.

Here are some Pixies.

A brilliant piece of writing there Adam
You should make the kids at your school read it!

Re The Smiths and how "a gap where they had been now existed" - remember when the music press used to, somewhat lazily, describe an up and coming band as "the new/next Smiths"? In the same way that, 10-15yrs later, they would want to describe bands as "the new/next Radiohead"?

Excellent stuff Adam. The dole and cheap higher ed played a huge part in the success of British bands. Probably why now that's gone our big stars are middle class.

I actually had an argument with Johnny Marr himself about this on Twitter. He said that good music was good music not matter who made it which is true, but I said it mattered if you couldn't support yourself while trying to make it.

James, Raymonde, etc. It was a bear kiss of death like being called "the new Dylan."

I think this was an incredibly liminal period where barriers between music started to drop (I imagine in no small part to drugs), people became less precious or scared about shouting their influences, people where rifling their parents' record collections for great tracks and sounds for samples too.

I forgot to say that it's an excellent bit of writing too, Adam.

Thanks everyone. Lots of food for thought.

To be fair Morrissey is still a gateway to outsider politics and culture.

Interesting, SA, well written as well! But still I think it's also a question of age: personally I would consider 84' - '86 as the period I liked best, because so many new bands successfully broke with punk and what came after punk. They tried fresh new things, things you wouldn't have heard before. I would say that listening to Peel on BFBS in that time, especially '84 + '85, made my jaws drop at least every third week because I heard something so uncommon compared to the 'post-post-punk' - stuff from a few years before ...