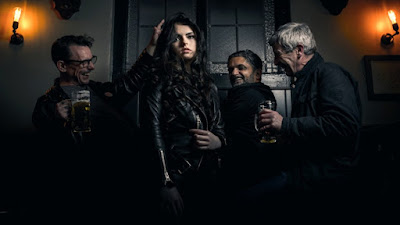 Rikki Turner, former Paris Angel, ex-New Southern Elektrik and The Hurt, is a restless soul who just keeps moving- when one project ends another begins. His latest group is San Pedro Collective, named after the town in California that was home to Rikki's favourite writer Charles Bukowski (and also home to Bagging Area favourites Minutemen). San Pedro are preparing for a release in July, an e.p. called The Demon Sessions, which will include this song (appearing here in a brief snippet and remixed by The Winachi Tribe).

The Things You See is a collaboration between Rikki and Suddi Raval, with a thundering acid house bassline, plenty of late night, dancefloor vibes and a sultry vocal from Millie MacBean. Also involved are Simon Wolstencroft (ex- Fall drummer), Antnee Egerton of The Winachi Tribe and Manc poet Karl Hildebrandt. The e.p. will feature the original mix of The Things You See and two further songs, San Pedro and A View From The Drowning Pool- the latter is a moody, electronic beast, bleeps and sirens over an 808 and Rikki's street poetics, spoken word vocal.

Suddi Raval was one half of Together who made two records I hold dear. The first was 1990 rave anthem Hardcore Uproar, piano house, a Star Wars sample and the crowd sounds from a rave in a warehouse at the Sett End in Blackburn.

The second was an unfinished remix Together did of Durutti Column's Contra-Indications. In 1990 Vini Reilly was experimenting with samplers and drum machines and his Obey The Time album chimed perfectly with the times. Together's remix was unfinished due to the tragic death of Suddi's partner in Together, Jon Donaghy, in a road accident in Ibiza. I've been coming back to The Together Mix for almost thirty years now and always get chills when I play it. Despite being unfinished Tony Wilson declared it magnificent and released it as a single anyway.


Rikki's former bands have all released songs that I've raved about here. In 2016 The Hurt released Berlin, a moody Scott Walker via Bowie, collar turned up against the falling Manchester rain.

Paris Angels were from Guide Bridge, near Ashton under Lyne, east of Manchester. Their first single is a legendary slice of 1990 Manchester, a marriage of acid house bass, jangly guitar lines and rattling machine drum with Rikki and Jane Gill's dual vocals. I once bumped into Jane at the Boardwalk- literally- and she told me to fuck off. Which was probably fair enough- I wasn't looking where I was going.

Perfume (All On You)

Perfume came out on indie label Sheer Joy and was widely played and praised. They followed it with two 12" singles- Scope and I Understand- before signing to Virgin (who re-released Perfume) and then put out an album called Sundew. Virgin was sold to EMI and a cull saw various bands removed from the label, Paris Angels among them (and PiL too). Which shows what major record labels know.

I was watching Assault on Precinct 13 in the small hours of this morning and thought to myself, I will need to dig out Hardcore Uproar tomorrow.

Rikki Turner has a magic touch. Perfume is a song that defines indie dance and that Early 90s sound. Perfume doesn't allow the song to get lost in the beats, which was my biggest complaint when artists started jumping on this particular sonic bandwagon.
I've been a big fan of everything Turner has released as The Hurt. Berlin is simply devastatingly dark and cool.
The Things You See has some of that Paris Angels magic - strong vocal performance - with layers of beats. Looking forward to it's release!