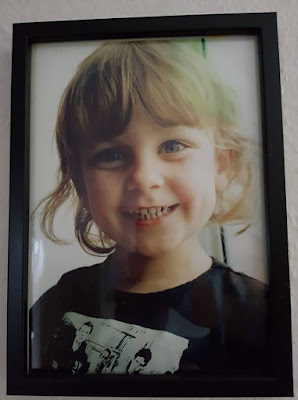 The little girl in this photograph, our daughter Eliza, turns sixteen today (coincidentally also the day she takes her last GCSE exam). The toddler in The Clash t-shirt seems a long time ago now. In recent time honoured fashion she has booked a day ticket for the Leeds festival, a rite of passage for today's teenagers. Happy birthday Eliza- enjoy the physics exam and your last day at school.

For many years Eliza and her friend have gone to dance classes, joined the team and performed locally and at shows. I've often gone to pick them up in the car from the classes. On one occasion when they were both much younger I had Misty Waters by The Kinks playing on the car CD player. They latched onto it and started singing along. It then became a thing, playing Misty Waters and all of us belting it out on the drive back from dance. We were still doing it a few weeks ago.

Recorded by The Kinks in 1968 Misty Waters was an outtake- an outtake!- that failed to make it onto either Four Well Respected Gentlemen or The Village Green Preservation Society and only turned up much later on The Great Lost Kinks Album.

Happy birthday to your daughter.

Time is a wheel, isn't it? Even when you're not looking, it keeps on turning and can run away from you before you know it.

Love this Kinks track, and also how curious things like "group singing obscure-ish Kinks track in the car on the way to dance class" become embedded in family ritual. Excellent.

Not sure I've heard Misty Water before, but you're right - it ain't no outtake!

Mine is 13 soon. Don’t know where the time went

Happy Birthday Eliza. I hope you've had a great day

Thanks everyone, she had a really good day.

Belated Birthday wishes to Eliza, hope those pesky exams didn't spoil it too much for her.