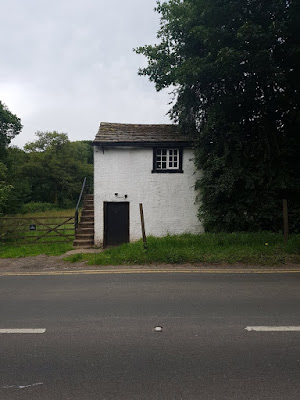 Alderley Edge has a long association with the mystical and esoteric. Legend has it King Arthur sleeps below the ground, inside the cliff at the Edge, waiting for the moment England needs him to come back and save it. 'Yo, Arthur- think that moment might be coming' you might be thinking. Merlin, Arthur's wizard, is associated with the site too. This little house is on the side of the road near The Wizard Pub, a strange little one up, one down affair. Today Alderley Edge is mainly associated with footballers, who live in enormous houses dotted around the village and frequent the wine bars and brasseries. People say the charity shops often have excellent, barely worn stock as a result. This may be rumour though- like Arthur's supposed return. Maybe if he does emerge he'll come bedecked in Balenciaga and Prada on his way to tackle Johnson and Farage with Excalibur.

Fireflies have a single out, a spooky, slow and smokey cover of a Kip Tyler song- She's My Witch, a song Arthur and Merlin could have sung. In this case vocals are from Dani Cali with Nina Walsh and Franck Alba. It's in the new series of Killing Eve (which I haven't seen but people are saying isn't as good as the first one. Ain't it always that way).

Kip Tyler featured here many years ago, back in the Friday night rockabilly series, a 50s rock 'n' roller and bongo player.

I'm liking your image of a risen King Arthur dressed in charity shop bling. Pure poetry. I think you could get a play out of this character. Something along the lines of Jez Butterworth's 'Jerusalem'. I'd watch it.
Also brings to mind Mark Smith's Joe Totale. 'The North Will Rise Again' lyric seems somehow prophetic of the brexit fiasco.
'...And was an opportunist man (Johnson, Farage?) come, come hear my story, how he set out to corrupt and destroy this future uprising'. 'The north will rise again....but it will turn out wrong!'
-SRC

Ta. There's a bloke who paints requests isn't there, on Twitter I think. I might ask him to do King Arthur dressed in Colleen Rooney's cast offs smiting Boris Johnson and Nigel Farage in Alderley Edge high street.