But I Don't Know Why 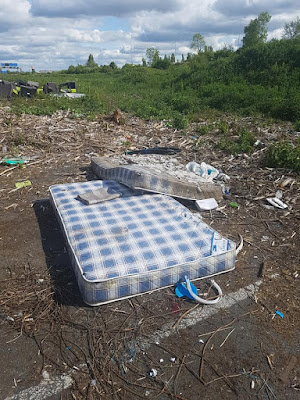 The Cramps have reared their heads and music at a couple of blogs recently which sent me back in a Lux and Ivy direction. While looking through my CDs I discovered I have, as well as 'proper' studio albums, four Cramps compilations, all of their early works- Songs The Lord Taught Us, Bad Music For Bad People, Off The Bone and File Under Sacred Music. The tracklistings are pretty identical,  give or take. Why have I bought so many Cramps compilations with such similar tracklistings? In my defence, if there is such a thing, two were bought cheaply at Fopp or somewhere similar when I was in the habit of buying CDs of albums I owned on vinyl for car listening. At some point in the shop I must have realised I didn't own Bad Music For Bad People and I liked the cover (although obviously the cover would work much better on vinyl than CD). 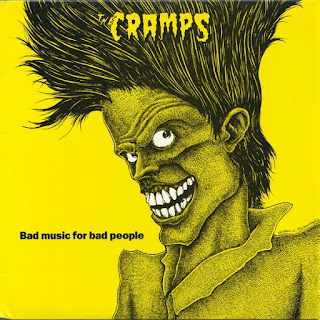 I own two of these compilations on vinyl, purchases that pre- date the CD ones- Off The Bone and Songs The Lord Taught Us (plus several other Cramps albums- Smell Of Female, Rockin' And Reelin' In Auckland, New Zealand, Psychedelic Jungle, A Date With Elvis and Stay Sick!).

In 1978 The Cramps released a 12" called Gravest Hits. I do not have a copy of this record but it's surely only a matter of time. Gravest Hits was a compilation of their two 7" singles that came out on Vengeance Records in '78, four covers and one original (Human Fly, The Way I Walk, Domino, Surfin Bird and Lonesome Town). In many ways The Cramps are a perfect band. Lux and Ivy, a couple, with a deep knowledge of the roots of the music (50s rock 'n' roll and rockabilly, 60s garage, some country and blues) filtered through some sci fi, golden age comics, horror movies and outsider culture. Along with Bryan Gregory and Nick Knox and produced by Alex Chilton this line up made many great songs and none greater than Human Fly.

The reverb heavy guitar line crawling it's way down the fretboard. The splash of cymbals and thud of the drums. Lux's quivering vocal.

Well worth owning across five different compilations in two different formats- and worth every penny.

Fabulous and much missed. Smell of Female is perhaps the most revered but there are some underrated jewells there too, A date With Elvis for example.

I love Stay Sick! an album with wall to wall brilliance. The early stuff is great too- Goo Goo Muck, A New Kind Of Kick and Drug Train all stand out for me.

I had Goo Goo Muck on 7" lovely transparent yellow vinyl.
Have you got the Weatherall compiled " Sci-Fi, Lo-Fi" comp from a few years ago? Imagine it would be right up your street...

Bad Music for Bad People is one of my oldest albums. I wonder how many times it has been played...