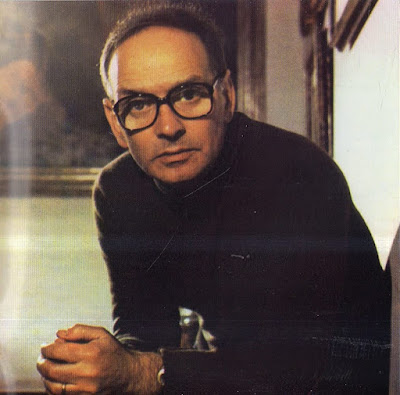 I've posted music by Ennio Morricone recently, back in May as part of a tribute to his Spaghetti Western soundtracks and the sampling of them by various bands (which you can find here) and also as part of at least two of my Isolation mixes. His death was announced yesterday. Ennio died aged 91 in hospital following a fall a few days earlier. It's fair to say that his soundtrack scores for Sergio Leone's Man With No Name trilogy redefined what a composer could do in cinema and Morricone went on to score over 500 films. In a lot of ways, for people around my age, his work was one of the sounds of our youth- the whip cracks, the whistling, the twangy guitars, the sweeping strings and the chanting. The songs stand alone too, as pieces of music to listen to away from the brilliance of Leone's films. A pioneer. RIP Ennio.

Watch Chimes  (From For A Few Dollars More)
Posted by Swiss Adam at 08:00

We lost one of the greats.

An absolutely incredible composer. And what output...he must have been working constantly.

Yes Adam as you said in your earlier post Morricone was the soundtrack to our youth. The perfect soundtrack to the anti-hero riding into town on a mule and taking us on hyper-real journeys of excitement. Blew my adolescent mind when i first saw and heard these films. Bravo Maestro RIP.