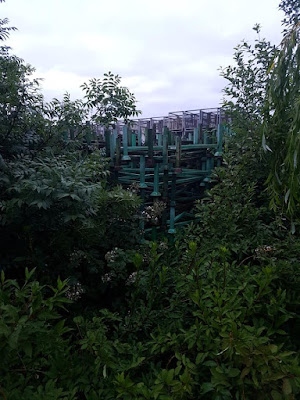 Green Gartside's recent 7" single for Rough Trade, a pair of covers of Anne Briggs folk songs, had me reaching into his back catalogue for the album Scritti Politti released in 2006. White Bread Black Beer was put out as Scritti Politti but was effectively a solo album. Green singing and playing all the instruments, recorded at home in Dalston. The fourteen songs are minimal, sparse recordings but lushly produced, Green's honeyed voice centre stage with acoustic guitars and keyboards. It's intimate but warm and a long way from the layered productions the 80s pop Scritti.

Fourteen songs feels a few too many now, a shorter album may have been worked better but there are some moments where the combination of voice, songwriting and production reach the heights. Dr Abernathy is one, named after an 18th century English surgeon but borrowing lines from 80s rap- 'punks jump up to get beat down/ all the days of my life'- and with lyrics about the Owl of Minerva (a symbol of knowledge and wisdom) and meth amphetamine. Album opener is another, a love letter to golden age hip hop, the drum machine that gives it its title and the songs of Run DMC. Green sings softly over some lovely synth chords for texture and a touch of echo, 'the boom boom bap/ the rat- a- tat- tat/ that's the beat of my life' and later 'the Yes Yes y'all/ was the siren call/ to come around to my life'. At the end he quotes Run DMC song titles in that softly sung way, 'Hard Times, Sucker MCs/ Jay's Game, 30 days/ Wake Up Hollis Crew/ Rock Box, It's Like That.... I love you still/ I always will'. Gorgeous stuff.

It is always a treat to see love for Scritti Politti outside of Brian's and my own blog! White Bread Black Beer is a wonderful collection that focuses on the songs with a minimal amount of embellishment. The songs are given room to breath, but lose none of the character that make them at once recognizable as the work of Green Gartside. I have so many favorites on the album, The Boom Boom Bap, Throw, Petrococadollar, the Beach Boys-esque Snow In Sun and the Beatles-esque Dr. Abernathy.

I was lucky enough to see Green Gartside in 2007 as part of the Venn Festival in Bristol. Although billed as a solo gig, it was the full Scritti Politti touring band: Rodhri Marsden, Alyssa McDonald & Dave Ferrett. It was a relatively short set - 9 songs, 5 of which were new songs at the time - but it was one of the best gigs I've ever seen and closed with a stunning version of The Boom Boom Bap.

I posted a review at the time on my (now defunct) blog and Rodhri Marsden commented to confirm that Green had just finished Robert E. Lee in the dressing room before coming onstage. What a guy!

Songs To Remember will always be one of my all-time favourite albums and despite its glossy production, I've a lot of time for most of Cupid & Psyche. The next couple of records didn't do much for me but I thoroughly enjoyed White Bread Black Beer, but on returning to it again a couple of years ago, I agree that it's maybe three songs too long.

The one truly magnificent thing about it was that it got Green Gartside out on the road again after a 25+ year absence and I was lucky enough to see the band play a small venue in Edinburgh. There was more of a hard edge to the live sound than on the record which made for a very good night. It wasn't a long set - about an hour max from recollection - but a small number of songs from the 80s were included.

In recent year's Scritti Politti have performed Chic's At Last I Am Free, which was, for me, one of the greatest cover versions of all times in the hand of Green's former labelmate at Rough Trade, Robert Wyatt. To see him/them live is still on my list waiting to be checked off...