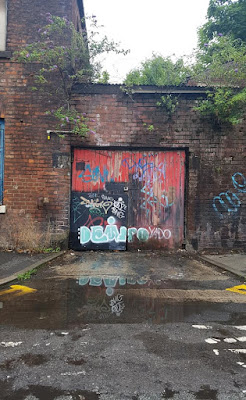 Raspberry Beret is not an especially long song by Monday's standards and it's an 80s 12" version which takes the original single and stretches it out adding three minutes in but it's an irrepressibly upbeat summer song and we could all do with some good vibes at the moment. In 1985 Prince was in his psychedelic pop phase. Raspberry Beret is the pinnacle of this sound, a cherry coloured pop song about teenage romance, first love, Saturday jobs that drag, second hand hats and the kind of girl who 'comes in through the out door'.

The 12" version has an extended intro with finger cymbals clacking before the strings come in, the song bursting at it's seams, and an lengthy instrumental section at the end with the finger bell percussion (sounding like the bell on he bicycle he gave her a backie on as they rode down to Old Man Johnson's farm coughing) some coughing and shakers, wheezy harmonica, the strings being brought back in and then dropped out again. Effortless brilliance.

One of the best pop songs of the 80s... but you'll have to try harder than that to convince me of the value of the 12" (in general). I didn't get in then, I still don't get it now.

A great song from a great album. Shame Prince never really pursued that direction afterwards. I was lucky enough to see Prince, on the tour for Under The Cherry Moon, even if it was at the crap Wembley Arena, and he'd already left this album behind. I was somewhat disappointed, but he was still amazing...

Rol- I don't think all 80s remixes necessarily work, some just extended the intro and outro without any adding anything of value. But this one works for me, I like the extra 3 minutes and it works on a dance floor.

Nick- agree, more in this vein wold have been a joy.

I'm going to make some assertions:

1: This is a fantastic Prince song

2: It has some of the worst lyrics of his career. I heard it on the radio on holiday last year and, as can happen when you're confronted with the familiar in unfamiliar circumstances, heard the words anew. There's barely a line that doesn't read like a placeholder to be sorted out later. The second line is 'My boss was Mister MacGee', for God's sake. It's a tribute to the man's genius nobody ever noticed

4: You can sing 'She left a knife in the fork drawer' instead

There are a few other problematic lines Tom, the one about her not being 'too bright' for starters. I sometimes mishear Old Man Johnson's farm as old Matt Johnson's farm and wonder how the man from The The got mixed up in all of of this too.

Its feels more like the 7" is an edit of this, rather than this being an extended version with extra bits awkwardly sewn in was is often the case. Odd lyrics aside, I love it.

"Aye. It's just a symptom of the moral decay that's gnawing at the heart of the country."

With you on the brilliance of this.

And kudos to Tom W for making me laugh with Matt Johnson;s would be answer to the bad potato crop question.