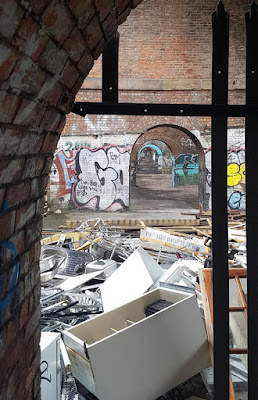 Neil Young's new/old album Homegrown came out last month. It was recorded in 1974 and 1975 and then Neil shelved it, despite the quality of the songs and the presence of both Crazy Horse and his other rotating cast of musicians including the likes of Ben Keith, Emmylou Harris and Robbie Robertson. It was too personal for Neil, some of the songs dealing with his recent breakup with Carrie Snodgrass and the pain and anguish it caused him.

A handful of the songs recorded for Homegrown made it onto other albums- Star of Bethlehem, White Line, Little Wing and Love Is A Rose all turned up elsewhere throughout the next decade and a half- but seven of them sat in Neil's house unheard and unshared, until Neil's decision to release Homegrown as he intended it to be back in 1975 but in 2020. This one has been worth the wait. Vacancy sounds as fresh as it was the day it was recorded, the band crunching their way through a mid- paced, twin guitar, stomp with Neil's voice floating over the top, 'I look in your eyes/ and I don't know what's there...'. The way the guitars lock together after the verses and the ringing guitar solo at the end is wonderful, pure Neil Young in '75.

The only moment on Homegrown that misfires is Florida, a two minute soundscape with Neil muttering over the top about cities and gliders but if you're on the homegrown there's a good chance some stoned ramblings will occur. Even so, it somehow works in the context of the album.

Homegrown should have been released after Harvest, when his acoustic guitar, singer- songwriter star was at its highest. Instead it lay in the vault for forty five years and he put out On The Beach (an album that deals with Charles Manson and has songs called Vampire Blues and Revolution Blues) and Tonight's The Night (and album recorded in the direct aftermath of the deaths of roadie Bruce Berry and guitarist Danny Whitten, Neil shaken to the core by both). Having shelved Homegrown for being too raw, he released two of the bleakest albums he ever made. That's where Neil was in 1975.

For The Turnstiles was on On The Beach, a sparse but sprightly banjo moan, Neil lamenting the price of fame and the artistic costs of arena rock via the metaphor of baseball.

Beastie Boys one day, Neil Young the next.

Never let it be said that this blog is an one-trick pony.

My continued ignorance of all that's being released nowadays would have seen me miss this. I'll add it to the list. cheers.