Life Comes In Phases Take The Good With The Bad 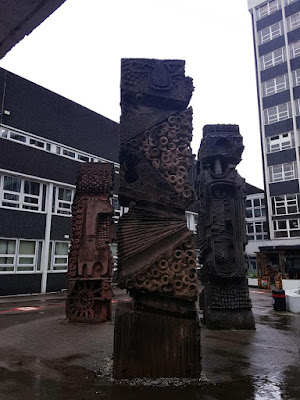 Back in the mid- 90s when the Beastie Boys were the best band in the world they release a run of albums- Check Your Head, Ill Communication, Hello Nasty- that were effortlessly brilliant. Mixing rap, funk, punk, dub, scratching and sampling with live instruments, adding Money Mark on keys and their own particular, cockeyed worldview- anything from science fiction films, late 60s/ early 70s fashions, golf visors, ramen, the mullet hairstyle, Lee Perry- they had a golden streak where it seemed like everything they did was a brilliant idea and that you were in on the joke even if you only got 25% of the references. Anyone else from the same period that could be considered for the 'best band in the world' title had nothing on the Beastie Boys.

Their golden phase was heralded in 1989 by the album they made when they took themselves away from Def Jam and off to Los Angeles and re- thought everything they did. Hooking up with the Dust Brothers (the real Dust Brothers) they rented a villa with a pool and the owners wardrobes, stuffed full of 70s clothing, and made Paul's Boutique. This album showed they were not the one- joke frat boys of Licensed To Ill and that they were not going to be one hit wonders. Paul's Boutique is a rich, complex- but- simple, layered record, samples from one hundred and five different records sprinkled over backing tracks The Dust Brothers had already created. On top of this multi- coloured, vibrant album where songs are constructed with split second timing, the three Beasties placed their three way rhymes, adding another layer to an already dense record. Not that it sounds too dense, it's all done with amazing beats, a sense of humour, innovation and a lightness of touch that draw you in from the moment the needle finds the groove (and this is very much an album that should be listened to on vinyl).

Looking Down The Barrel Of A Gun is one of the most straight ahead songs on  Paul's Boutique, a dusty rock drum beat (borrowed from Michael Viner's Incredible Bongo Band and their song Last Bongo In Belgium) rumbles away for a couple bars before the heavy guitar riff comes in, sounding like it's on a turntable that is slowing down, and then the Beasties and their whining NYC rapping and smothered in echo describing the stupidity of violence...

'Rolling down the hill snowball getting bigger
An explosion in the chamber the hammer from the trigger...'

There's a Pink Floyd sample in there, the piano chord from Time, clanging away. The super heavy Black Sabbath rock vibes continue through til the tension snaps at one minute fifty...

A pause, then the drums beat doubles and a guitar chord crashes in- both stolen from Mississippi Queen by Mountain- and the second half gets underway. Rambo, Bruce Willis, Son Of Sam and Clockwork Orange get name checked and the crunching riff and rolling drums carry us through...

The vocals finish at that point but there's still a seriously deranged guitar riff to deal with, circling down the plughole, before the drum beat comes to dead stop.

Looking Down The Barrel Of A Gun
Posted by Swiss Adam at 08:00

Wow, this sounds great. I haven't listened to the album in too long a time.

An album that I bought on vinyl just a few weeks ago - long wanted it and I don't care that it's the reissued version and not the 1988 original. A genuinely astonishing record that I can't ever see me tiring of......but it does taken some getting used to that I have to change sides three times instead of it being all way through as on CD.

The original vinyl was just one disc so only one side change. I guess the re- issue is a double disc edition?

Money Mark really did add something. Wish I could still find his "Money Mark's Keyboard Repair" album that I used to play all the time, it was brilliant.

Yep- been meaning to post some Money Mark for a while, will get around to it soon.

The Atlanta singer Mattiel just released a quite credible version of "Looking Down The Barrel" (with "Guns of Brixton" on the flipside). It's all high spirits.