I Know The Place And I'm Going Home 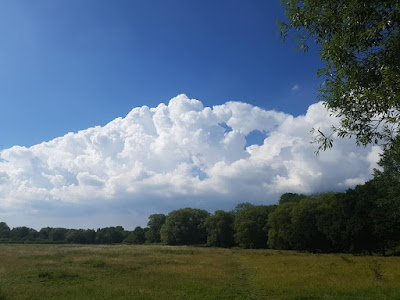 Back at the start of lockdown in March, when the evenings were chilly and it was still going dark early and no one really knew what any of this was going to be like, I listened to an upload of an interview Nina Walsh did with an internet radio station (a Brighton based radio station I think). The interview was a couple of years old and some of what she discussed and played was put into stark light by the then recent passing of Andrew Weatherall. Some of what she played also struck a chord with me as I was finding bits and bobs of folk music were suiting the days and the times really well- Nick Drake for one which I wrote about here.

This song really grabbed me and I went and ordered a copy of the CD almost straight away. In 1992 Buffy Sainte- Marie, 60s folk and psychedelic pop singer and life long advocate of the rights of North America's indigenous peoples, had entered artistic semi- retirement and spent much of the 1980s raising her son. Buffy was an early adopter of computers in home -recording and making art and her 1992 album was recorded at her home in 1990 and then sent to London for some further production and mixing via something called the internet, using something called a modum. The album- Coincidence And Likely Stories- her first for sixteen years, makes use of sequencers, programming and keyboards but is also an early 90s folk record, some traditional instruments, some New Age element and some early 90s sonics too. In places it is stunning, a moving and emotional comeback, with songs that deal with the plight of the Native Americans (Bury My Heart At Wounded Knee), politics, greed and big business. There's nothing fey or timid about the album, Buffy's songs are hard hitting, modernised folk music. Some of it sounds a bit too stuck in the early 90s now but this song made a deep impression, especially back in March when we were suddenly confronted with lockdown and everything it brought with it.

She's one of those names that many are probably aware of, as she crops up a lot in music magazines and seems highly thought of. However I don't think I've knowingly ever heard her. Will give it a listen, ta.

My favourite song from "Coincidence and Likely Stories" is "The Big Ones Get Away". A friend of mine had most of Buffy Sainte-Marie's early albums (1960's) and I got to know great songs such as "Now That the Buffalo's Gone" and "Cripple Creek" - the latter has Buffy playing the mouth bow and is worth hearing.

Me too, saw Buffy's name for years, often read references to her but until recently had never knowingly listened to her.