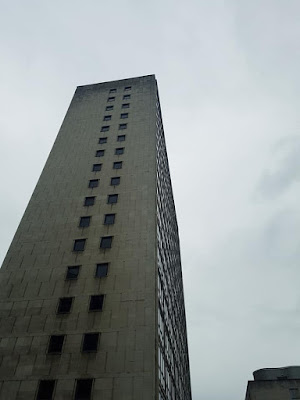 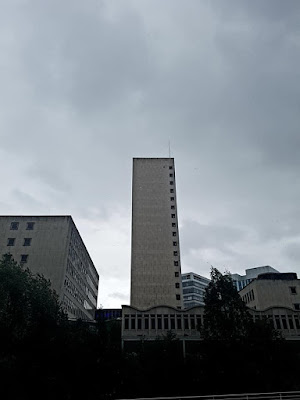 This is Albert Bridge House in Manchester, an eighteen storey office building with lower level ones around it- check out the wave roof on the building at the fore in my photo, overlooking the River Irwell. It's housed various government departments over the years and has been described as 'the best modern building in Manchester' and 'an outstanding example of what good proportions and straightforward design'. Obviously it is currently under threat of demolition. Manchester City Council bend over backwards for anyone with money who want to demolish anything that is 'outdated' or 'ugly' and replace them with enormous glass towers that offer 'mixed use' development (this is usually un- affordable housing plus restaurants and/or a huge hotel). Recent reports have detailed how the planning committee has been meeting behind closed doors, as a response to Covid, and has been waving through developments that would have been held up to greater scrutiny otherwise. I've said before, I don't think that cities can or should be preserved in aspic and that cities are organic and change, buildings are put up, taken down, replaced and demolished, but the rate of change, kowtowing to private enterprise and lack of coherence in Manchester is out of control.

Here's some totally unconnected music for the Monday long song slot. In 1993 a single was released by the Peace Together project, a charity aimed at raising funds for cross- community activities for young people in Northern Ireland. The Peace Together single, Be Still, involved a huge cast of musicians and characters including Sinead O'Connor, Jah Wobble, Clive Langer, Nanci Griffiths, Feargal Sharkey, Peter Gabriel and Therapy? The CD single had remixes of Be Still by Robin Guthire with Liz Fraser on vocals and this epic Sabres Of Paradise remix.

Be Still (Sabres Of Paradise Remix)

This is one of the lost/overlooked Weatherall remixes from the 1990s, a twelve minute tour de force of Gaelic dub, tin whistles, echoing rimshots, bodhran, descending bass from Wobble, waves of synth and long, sustained keyboard chords and some of those trademark Sabres production touches from Gary Burns and Jagz Kooner. This remix often gets missed out of the round ups and retrospectives and it's a mystery to me why it does because it's Sabres Of Paradise at their extended dubby best.
Posted by Swiss Adam at 08:00

It's a disgrace that so many people in positions of power are using the lockdown as an excuse to feather their nests.

"Mixed use development" really is the current way of taking any character or individuality out of our cities isn't it. On a visit to Birmingham last year, doing the university visits with our daughter, I was staggerred by just how many of these developments there were around the city. I mean how many blandly similar eating places does anyone need? All virtually empty when we visited. Ridiculous.

It is sad to see in which way the cities develop today. And not only because of Covid. As you said, old buildings I grew up with will be replaced by new glass towers and the shops will disappear because the owners can't pay the rent any more. In a near future all the main roads in the cities will look the same. A fantastic song by the way.