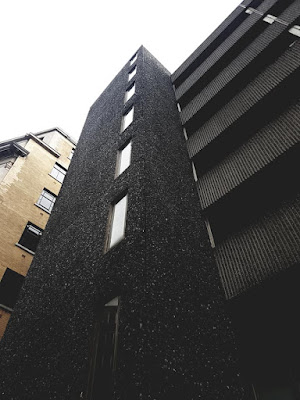 Last Thursday the incredible twenty one hours of mixes put together by Andrew Weatherall's former colleagues and friends, pulled together by Andrew Curley for the Glade Area at the virtual Glastonbury, went live at Mixcloud. There's is so much to enjoy in them- Timothy J Fairplay's mix, a heady, sticky ninety minutes of electronic dance music, Richard Sen's barnstorming ride through dance music littered with samples Andrew used and songs he played and Justin Robertson's masterclass in bumpity bumpity house music have been getting plays round here this week.

In the early 1990s Andrew worked with David Harrow in various guises- as the Planet 4 Folk Quartet, as Deanne Day and as Blood Sugar. The pair released a superb double pack of 12" singles as Blood Sugar, Levels, scratchy deep house meets dub techno. The Blood Sugar night is represented in the Glade mixes with ninety minutes of outstanding digital dub techno, Basic Channel sounds, from the hands of Rick Hopkins (here). The Blood Sugar mixes were the type of thing that got passed around on cassette, nth generation copies with tape hiss as an indelible part of the experience. David Harrow, now resident in LA, has put together his own mix, half an hour of tracks he and Andrew made together. See it as an encore, digital dub techno, intense, minimal, glide by grooves, including the sweet deep house majesty of Deanne Day's Hardly Breathe.

David is still very productive and his Bandcamp page regularly sees new and old music posted. You can find music he made with the late Bim Sherman there and this release, Machine Dubs. Headspinning, experimental, ambient techno with dubby basslines.