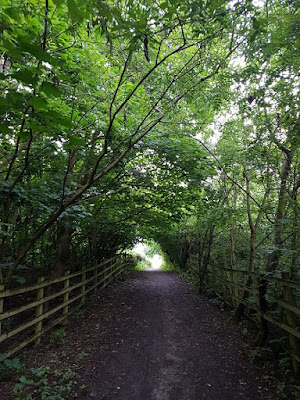 Lockdown ends today- at least, that's how the government and the media have been portraying it with occasional reminders that social distancing and a 2 metre gap might be important. The government have largely dropped the daily infection figures and death toll from their bulletins. You don't want to be depressing people at this stage of proceedings with doom and gloom, not when there are pints to be drunk! The media have been splashing stories about Super Saturday, Independence Day and the End Of Hibernation. It does look like they deliberately chose July 4th so they could call it an Independence Day. Meanwhile, Leicester is in lockdown, the R rate in London is apparently creeping above 1, there are Covid hotspots around the country, the deaths are still well over one hundred every day, and lots of people are talking about a second wave and a second spike without the people in charge actually wanting to do anything about it. We are still shielding, the medical advice we received this week is that due to our son Isaac being in the extremely vulnerable category we should stay in isolation until August 1st. Despite a few minor changes to our lockdown lives, we are still very much in isolation.

This mix is an hour and eight minutes of music with a folky, ambient, pastoral tinge with some Balearica and guitars thrown in, some old stuff and some brand new- some birdsong and synth ambience to start and finish, blissed out tracks from Seahawks, Apiento and Ultramarine, Green Gartside solo and as Scritti Politti, acoustic guitars courtesy of Nancy Noise, Michael Head and Barry Woolnough, some understated brilliance from The Clash and Sandinista!, Julian Cope covering Roky Erickson, Thurston Moore covering New Order and Jane Weaver's cosmic/folky weirdness.

Terrific stuff once again. Great choices, some very intriguing ones in there today.
As for the government and their Super Saturday BS, well I've spent the whole day at home listening to music and reading, the safest option, living as I do near London. Just don't get me started on the cretins in charge and their trying to end lockdown, we'll be here all night...

Loved it. Quite a few tracks that were new to me, but proof (if needed) that Green Gartside & Scritti Politti, The Clash and Julian Cope can complement any setting. The Julian Cope selection is one of my favourite of "his" songs, despite being a cover version. A great start to my Sunday morning! Cheers, Khayem

Thanks both.
I wasn't 100% sure Green, the Clash and Cope would work together until I tried it.

Sadly only got 19 mins into this before being interrupted yesterday, came to pick up where I left off and it's gone...

It's still there as far as I can see Tom. Where are you trying to get it from?

Clearly a browser issue, just a blank space on Safari but tried it with Opera and it's there, so I shall pick up where I left off tomorrow morning. thanks